In a research report released yesterday William Blair analyst Sharon Zackfia reiterated an Outperform rating on Panera Bread Company (PNRA) amid indicators that revitalization efforts are paying off. No price target was provided.

Zackfia wrote, “Company-owned same-store sales rose 0.1% against a 3.8% comparison, below our and consensus expectations of 1.5% to 2.0% and inclusive of a roughly 40-basis-point penalty tied to the shift of Easter into April. With 0.6% of price and 90 basis points of unfavorable mix shift (the first negative mix shift in three years as the company lapped the introduction of higher-priced shrimp items in the year-ago period), traffic at company-owned locations rose 0.4% (up 0.8% excluding the Easter shift), marking the first quarter of traffic growth at Panera since the third quarter of 2012 and exceeding our projection for slightly negative traffic trends. On a systemwide basis, same-store sales were flat against a 3.7% comparison, yielding total revenue growth of 7%, to $631 million, below consensus of $640 million”.

She continued, “With expectations for lowered sales and earnings expectations already largely expected by the Street, we believe the resumption of traffic gains at Panera will take center stage with investors and could reignite lackluster investor sentiment on the stock given an EV to 2015 EBITDA of roughly 9 times”.

According to TipRanks.com, which measures analysts’ and bloggers’ success rate based on how their calls perform analyst Sharon Zackfia has a 22.6% average return and a 56.3% success rate. Zackfia is ranked #445 out of 3189 analysts. 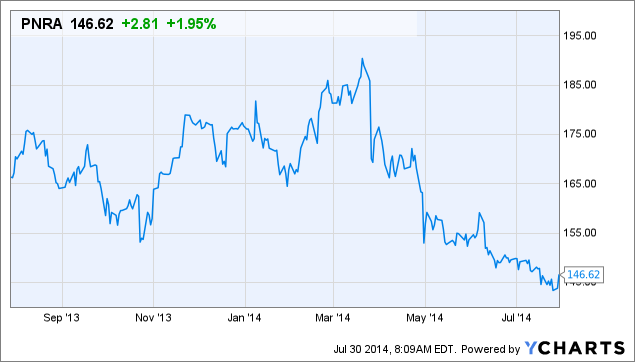