William Blair analyst Jonathan Ho reiterated an Outperform rating on Palo Alto Networks (NYSEARCA:PANW), as the company, according to the analyst, delivered another strong quarter with results handily exceeding Blair’s estimates for both billings and revenue. No price target was provided.

Ho noted, “We were encouraged by another strong quarter of results that indicate the success Palo Alto is seeing in taking share from incumbent vendors. As the company comes closer to realizing its platform vision, we believe Palo Alto could be an attractive platform play, offering a fully interoperable security posture across the cloud, network gateway, and endpoint. This could expand the company’s addressable market opportunity significantly, and based on its positioning as a key platform, we believe investors may still be underestimating how large the company has the potential to become.”

The analyst added, “The stock closed trading about 34.5 times our initial fiscal 2016 free cash flow estimate of $278.4 million, which we view as a reasonable valuation, based on the prospect for continued strong top-line growth of 40.4% in fiscal year 2015 and 32.7% in 2016, strong free cash flow generation, and investor demand for stocks in the cybersecurity space. The company has close to $7.00 in cash and securities per share.”

According to TipRanks.com, which measures analysts’ and bloggers’ success rate based on how their calls perform, analyst Jonathan Ho has a total average return of 6.5% and a 56.3% success rate. Ho has a 33.5% average return when recommending PANW, and is ranked #1364 out of 3385 analysts. 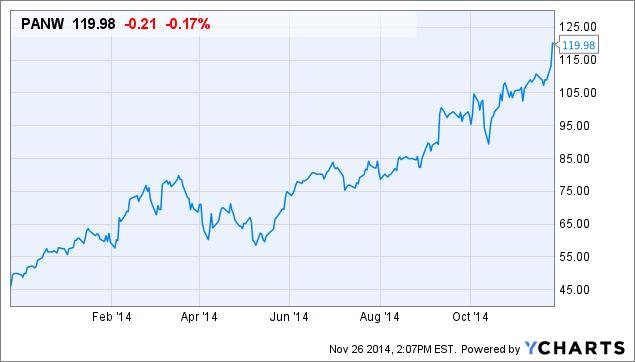