In a research report issued Friday, William Blair analyst Robert Napoli reiterated an Outperform rating on shares of Mastercard Inc (NYSE:MA), after the company hosted an investment community meeting on September 9, 2015, where the management team provided updates on the company, including strategy, product and business initiatives.

Napoli wrote, “The core growth drivers of MasterCard’s business appear intact, and we came away from MasterCard’s investor day with greater appreciation of management’s efforts to leverage its market position and network through its services business (25% of revenue). We believe MasterCard enjoys substantial barriers to entry as incumbents have massive scale and global reach, leading security and data management skills, information intelligence, brand recognition, and trust. The company generates strong free cash flow, and has returned $14 billion to shareholders in the form of dividends and share buybacks since 2007.”

The analyst concluded, “We believe MasterCard remains well positioned to capitalize on the secular growth of electronic payments and increased global consumption. From a high level, MasterCard’s growth continues to be driven by three factors: 1) growth in personal consumption expenditures (PCE); 2) MasterCard’s share of PCE; and 3) pricing/acquisitions and other. Collectively, management anticipates its end-market is growing 8%-10% per year (driven by 5% PCE growth, 3%-5% shift to electronic forms of payments), with internal initiatives driving low- to midteens revenue growth.” 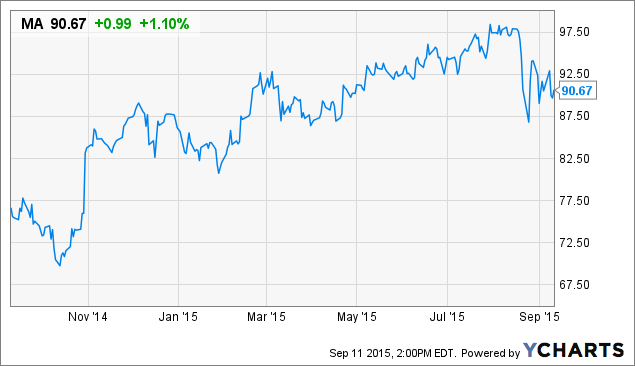