In a research report released yesterday, William Blair analyst Sharon Zackfia reiterated an Outperform rating on Harley Davidson Inc. (HOG) amid forecasts of the company’s second quarter results to be in-line with her expectations. No price target was assigned.

Zackfia noted, “We expect Harley-Davidson will meet our second-quarter EPS estimate of $1.47, up 22% and essentially in line with consensus of $1.46. Harley will report secondquarter earnings before the markets open on Tuesday, July 22”.

She continued, “Harley’s shares have declined about 3% since the end of June as dealer checks have begun to bring down retail sales expectations. Still, we believe production and margin guidance should remain intact and we continue to like shares at 15 times our 2015 EPS estimate as we see the potential for multiple expansion given the strength of Harley’s brand and a continued tailwind from strong innovation and robust demand for late-cycle durable goods. In addition, we expect that operating margin will continue to improve as the company’s post-restructuring, lower-cost manufacturing paradigm is increasingly levered over greater production volumes, with a return to mid-20% operating margins possible over the next two years”.

According to TipRanks.com, which measures analysts and bloggers success rate based on how their calls perform, analyst Sharon Zackfia currently has a one-year average return of 26.6% and a 64% success rate. Zackfia has a 25.2%when recommending HOG, and is ranked #417 out of 3211 analysts. 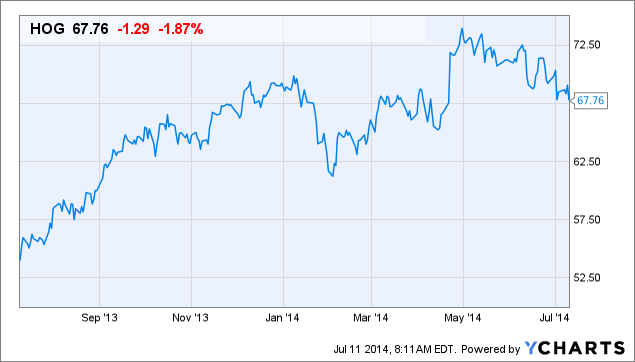