In a research note released yesterday, William Blair analyst Ryan Merkel reiterated an Outperform rating on Fastenal Company (FAST) as estimates predict a growth of 13% in June following 13.5% growth in May. No price target was stated.

Merkel noted, “Our view is that 13% organic sales growth is mostly about hiring sales FTEs and success with vending—not a better economy. Our sense is that the broad industrial macro is improving some, but Fastenal remains weighed down by heavy equipment manufacturing customers (20% of sales). This group appears to have stabilized, but is not ramping up. Nonresidential macro data points and commentary from industry players is improving, but Fastenal has not seen a major change in trend. This part of our thesis is a little behind schedule, but we are comfortable with continued progress as the year unfolds. We will get an early read on March with MSC Industrial (MSM $95.53; Outperform) reporting two days prior to Fastenal. If MSC’s June growth is 10%, we expect Fastenal will deliver 13%”.

With respect to the upcoming month, Merkel noted, “We forecast 18% ADS growth in July which we believe could be a catalyst for shares. While the comparison is the easiest of the year, it will still be a big number that growth investors will pay attention to. A strong result in July will also give us confidence in 15%-17% growth for the reminder of the year. Improved productivity from THUB will be a second-half catalyst”. 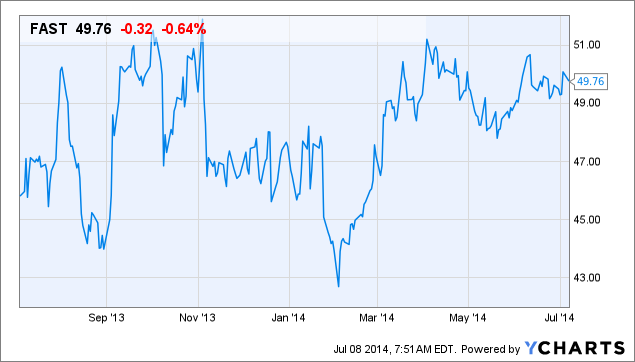