Merkel wrote, “Bulls like us believe gross margin holds near51% and 15%-17% top-line growth leverages 10% expense growth into 15%-plus EPS growth. The bear case is sales grow, but no earnings leverage. Only time will tell. We fully believe if gross margin was 30 basis points higher the stock would be up today. Sales growth at 12% is by far the best in the peer group, and we see acceleration to 15%-16%. Fastenal proved it can still invest and get superior growth. Difficult gross margin comparisons arenow done. Further, heavy manufacturing customers arefirming up, SG&A was well controlled, and 10-year and older stores grew double digits in June. On easier gross margin comparisons, we will still project EPS growing 15% in the third quarter and 23% in the fourth quarter. If one believes that gross margin does not fall to the low 50% range, the stock is a strong buy at $46”.

The analyst continued, “At $46, the stock is trading at 27 times our 2014 EPS estimate,roughly in line with the historical average. While the near-term lack of earnings leverage has beendisappointing, our thesis does not change that Fastenal should see accelerating earnings growth in 2014 with easy comparisons,momentum with several initiatives, and better manufacturing and nonresidential construction demand. Assuming a gradual industrial recovery is underway, we believe EPS can grow 20% in late 2014 and 2015. Optimizing vending with THUB remains a source of considerable upside, in our view”.

According to TipRanks.com, which measures analysts and bloggers success rate based on how their calls perform, analyst Ryan Merkel currently has a one-year average return of 4.7% and a 50% success rate. Merkel has an -7.2% average profit when recommending FAST, and is ranked #2399 out of 3212 analysts. 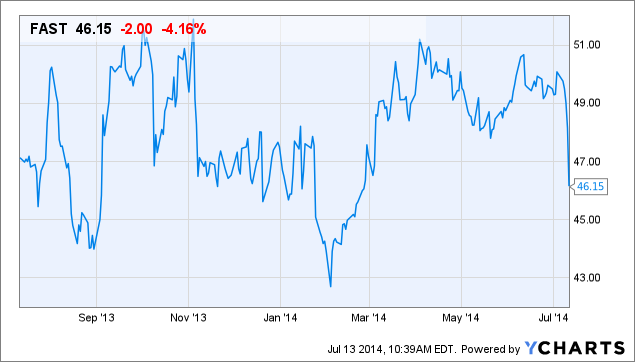