In a research report released Wednesday, William Blair analyst Brian Weinstein reiterated an Outperform rating on Exact Sciences (NASDAQ:EXAS), following the news that the Centers for Medicare & Medicaid Services (CMS) issued a final payment decision confirming the preliminary decision in October that Cologuard, the company’s noninvasive, stool DNA colorectal cancer screening test, will be reimbursed at $502 per test. No price target was provided.

Weinstein wrote, “While this is slightly earlier than the December time frame we were expecting, this does not affect the date to which CMS payments will be backdated (the date of the final NCD—October 9, 2014).” He continued, “while there was some noise being made about a potential discount to $502, we always thought this was a long shot that we gave essentially 0% probability in our model. As a result, we are not surprised the stock was up only by a couple of percentage points today.”

The analyst concluded, “For all of the impressive progress the company has made over the past couple of years to get Cologuard through a major clinical trial, approved by the FDA in a parallel decision with a positive CMS coverage decision, and reimbursed at the full $502 requested from the CMS, we continue to base our valuation on the future opportunity for this test and this company and not on the near-term uptake.” 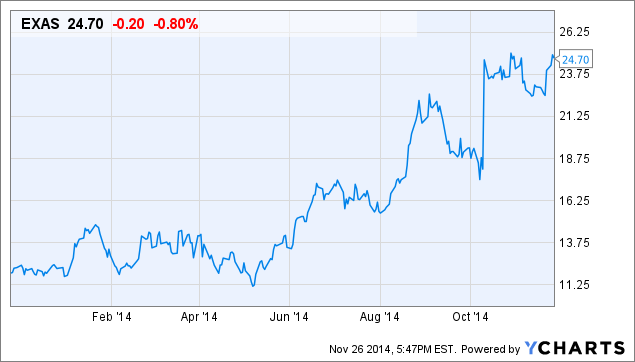