In a research note issued yesterday, William Blair analyst Brian Weinstein reiterated an Outperform rating on Exact Sciences Corporation (EXAS) on the heels of a brief presentation made by the company’s CEO, Kevin Conroy. No price target was assigned.

Weinstein noted, “Exact Sciences CEO Kevin Conroy made a short presentation at the Annual Clinical Laboratory Public Meeting, where he made the case that a crosswalk methodology should be used to establish $502 reimbursement for Cologuard. This is consistent with what the company has stated for some time; however, we learned the final tier-1 code (81315, reimbursed at $282.83) that Exact believes addresses the time and effort required to run the methylation component of the test (methylation markers BMP3 and NDRG4 do not have tier-1 codes). This meeting will be followed by two weeks open to public commentary, and preliminary determinations will be posted on the Centers for Medicare & Medicaid Services’ (CMS) website as soon as possible, aiming for before the end of August”.

The analyst continued, “The overwhelming endorsement of the Cologuard product at the recent FDA panel, management’s tone on reimbursement following recent conversations with the CMS, and its inclusion on the HAPG Clinical Lab Fee Schedule Meeting, along with the strong influence the New England Journal of Medicine (NEJM) publication has, combined to boost our confidence in this story. We remain bullish on the stock as we continue to have a strong belief in the product, the market it addresses, and management’s positioning of the company for commercial success. Our revenue and profitability targets remain unchanged, though near-term revenue targets (2014 and 2015) are likely to be recalibrated depending on timing of approvals, and we would not be surprised to see other analyst targets come in a fair bit (several have not updated their models in quite some time)”.

According to TipRanks.com, which measures analysts and bloggers success rate based on how their calls perform, analyst Brian Weinstein currently has a one-year average return of 4.2% and an 25% success rate. Weinstein is ranked #2137 out of 3215 analysts. 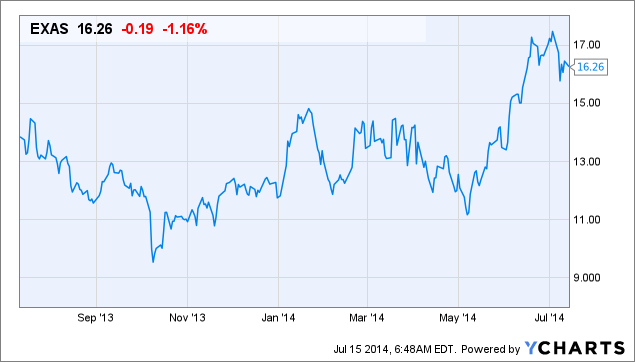