In a research report published Wednesday, William Blair analyst Robert Napoli reiterated an Outperform rating on Discover Financial Services (NYSE:DFS), as the company reported solid monthly managed and master trust credit card data for September, which was generally in line with to slightly better than Napoli expectations. No price target was given.

Napoli noted, “We increased our estimates, primarily because of the lower than previously forecast loss rates and secondarily to a slightly larger card portfolio. Our third-quarter EPS estimate goes to $1.34 from $1.29, which compares with consensus of $1.33. Our full-year EPS estimates go to $5.26 from $5.20 in 2014 and to $5.50 from $5.43 in 2015. The consensus estimates are $5.32 in 2014 and $5.63 in 2015. We believe the primary difference in our estimates versus consensus is our forecast for a faster normalization of credit losses and reserve builds. Based on the current delinquency trends, we believe we could be conservative on our loss rate forecast, which we have increasing to 2.8% by the end of 2015. We could also be conservative on our card portfolio growth, which we peg at 4.3% in 2015, as we sense an increased consumer borrowing appetite as well as some slight loosening of credit standards and credit lines broadly. Discover continues to take market share, although the growth comps will be tougher in 2015.” 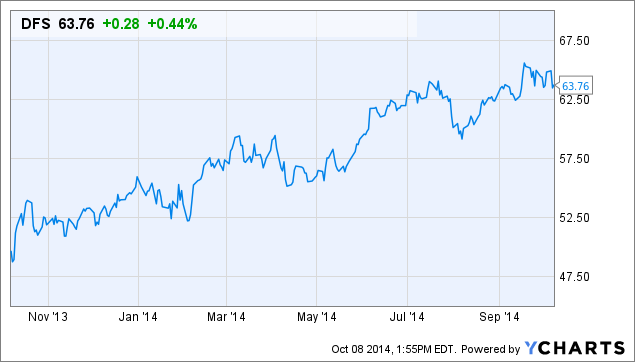