In a research note issued yesterday, William Blair analyst Jason Ader reiterated an Outperform rating on CommVault System’s (CVLT) and no price target was provided. The note follows CVLT’s fiscal first-quarter results, which included sales that beat the Street target by $1.6 million while non-GAAP EPS were $0.03 better than consensus with roughly a $0.02 benefit resulting from the company’s record 2.1 million share repurchase. Closely watched license revenue grew by 10% year-over-year, above the Street’s 8% growth expectation and roughly in line with the prior quarter.

Ader wrote, “We believe that these results, which included a slight year-over-year revenue growth acceleration from the prior quarter, should begin to alleviate investor concerns around a deceleration in the business. The results also validate management’s prior claim that the prime contributors to the underperformance during the fourth quarter were unusually low large-deal close rates and understaffing in the core enterprise business in the Americas rather than any competitive factor or secular market weakness”.

The analyst continued, “We believe the company’s Simpana 10 R2 release, which is expected in the next few weeks, should improve CommVault’s competitive standing against newer SMB players, such as Actifio, Veeam, and Code42. R2 will include simplified packaging and new pricing that will make it easier for customers to acquire Simpana-based solutions that solve specific issues. The release will include new capabilities, such as cloud lifecycle management, stand-alone solutions for virtual machine management and e-mail archiving, a stand-alone mobile solution with enhanced functionality, live native copy options, new security information and event management, and the introduction of an appliance program”. 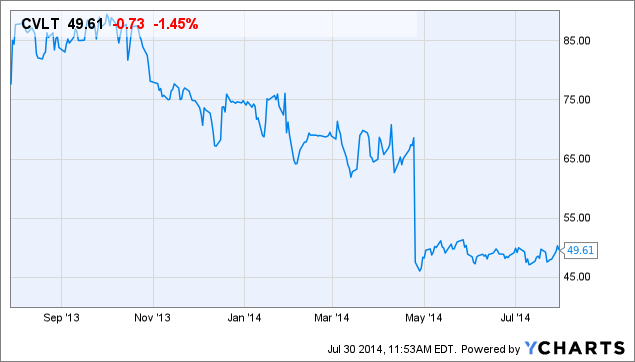