Ader observed, “We believe Aruba is being prudently conservative as it seeks to strike the right balance between growth and profitability. Furthermore, we take comfort in the fact that Aruba continues to make progress on addressing several key investor concerns, including potential Wi-Fi commoditization (zero evidence of this marketwide), risks around Cisco (CSCO $26.81; Outperform) competition (Aruba has been clearly taking share over the last couple of quarters), lack of operating leverage (Aruba is showing sharp expansion, as outlined above), and high stock compensation (management is reducing this, with significant progress already made).”

The analyst added, “Given our expectation of close to 20% revenue growth over the next two fiscal years and even faster earnings growth, we believe the stock is undervalued at a calendar 2015 cash-adjusted P/E multiple of 14.1 times (straight P/E multiple of 16.4 times, based on after-hours prices) and an EV/sales multiple of 2.1 times.”

According to TipRanks.com, which measures analysts’ and bloggers’ success rate based on how their calls perform, analyst Jason Ader has a total average return of 3.8% and a 52.3% success rate. Ader has a 11.4% average return when recommending ARUN, and is ranked #1278 out of 3377 analysts. 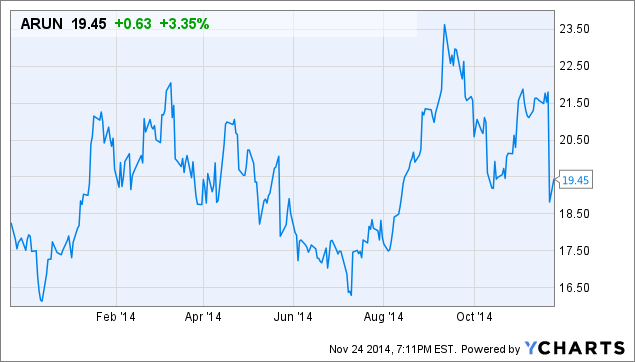