William Blair analyst Amy Noblin is out with a research report on Abercrombie & Fitch Company (NYSE:ANF), reiterating an Outperform rating, as the company announced that its long-time CEO Mike Jeffries is retiring, effective immediately. No price target was provided.

Noblin wrote, “Investors had been looking for leadership change from Abercrombie for some time, with corporate governance changes made earlier this year and the hiring of brand presidents. The timing is what is surprising here, with the brand presidents starting just six weeks ago and following last week’s earnings release.”

The analyst continued, “Despite the seemingly abrupt nature of the announcement, we are being told that his departure is not related to any disagreement with the board, legal issues, or shareholder disputes, but more that the board’s ongoing contemplation of succession planning culminated in conversations over the last week. While there is still a long road ahead, the potential for new leadership, meaningful opportunity for productivity and margin recovery, and a valuation of 14.4 times 2015 estimates create a compelling risk/reward profile, in our view.” 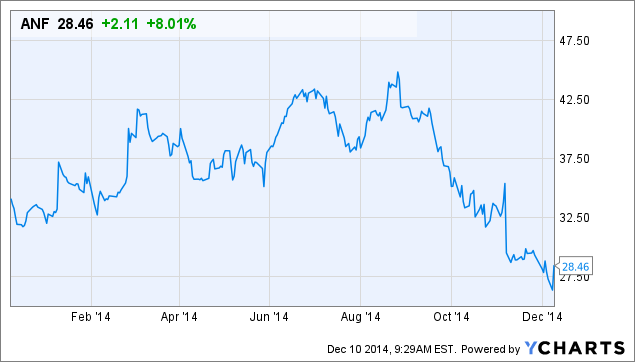