Zackfia wrote, “Domestic demand for the Street appears healthy, with the New York dealer indicating demand is outstripping supply at this early juncture, with particularly healthy conversion among young adults. While management did not comment as to whether Sportster sales have begun to rebound in the wake of the Street debut, the NYC dealer indicated his belief that Street customers would likely upgrade to more expensive bikes within a year or two of purchase.” The analyst added, “Model year 2015 features seven new bikes, including the return of the Road Glide, which was out of production for roughly a year and accounts for 10% of Harley’s domestic retail sales. The introduction of model year 2015 occurs as the company laps a tremendous response to model year 2014, which featured eight new Rushmore bikes and stimulated a 20% increase in domestic retail sales in the third quarter of last year.”

Zackfia continued, “We continue to like Harley shares, at 14 times our 2015 EPS estimate, particularly as we see the potential for domestic retail sales trends to rebound as comparisons ease after this quarter and the company laps tough winter and spring weather. Moreover, we continue to believe the longer-term story on demographic and international expansion remain key tailwinds, with a return to mid-20% operating margins possible over the next two years (versus 21.9% in 2013).” 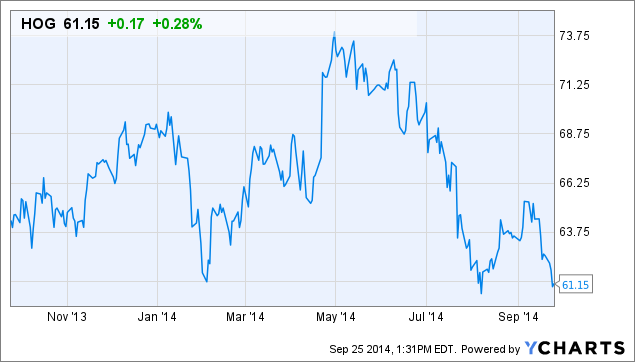