Suri noted, “Citrix posted third-quarter results that were below consensus estimates on the top line but above on the bottom line. Revenue of $759 million was below the Street’s $772 million estimate and roughly $6 million below the low end of management’s guidance range of $765 million-$775 million. Our sense is that four key factors contributed to the weak third-quarter results: 1) the timing of some large deals, which may have been delayed into the fourth quarter; 2) customers possibly waiting for the new XenApp/XenDesktop 7.6 offerings, which came out late in the quarter; 3) the weakness in the NetScaler business, which experiences volatility on a quarter-to-quarter basis; and 4) geopolitical factors in Europe, China, Russia, and Japan. Non-GAAP diluted earnings per share of $0.75 were $0.02 ahead of consensus expectations and the high end of management’s guidance range of $0.70-$0.73.”

According to TipRanks.com, which measures analysts’ and bloggers’ success rate based on how their calls perform, analyst Bhavan Suri has a total average return of 2.7% and a 51.7% success rate. Suri has a 23.4% average return when recommending CTXS, and is ranked #1391 out of 3339 analysts. 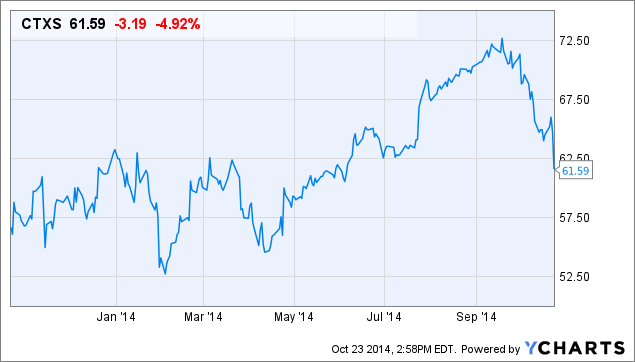