In a research report released Tuesday, William Blair analyst Tim Lugo reiterated a Market Perform rating on shares of Zogenix, Inc. (NASDAQ:ZGNX), after the company released its second-quarter results and provided an update on its pipeline developments.

Lugo wrote, “We continue to rate shares of Zogenix Market Perform as the company shifts back into a development stage company with two CNS pipeline assets. While we are intrigued by ZX008’s potential in Dravet’s syndrome and the stock has clearly outperformed since shining a light on the potential in Dravet’s, we are a bit worried given the lack of execution in the past. We would not be surprised if pivotal data slipped beyond 2016 and would like to become comfortable with enrollment prior to recommending shares, and while the company has another asset in Relday, we are concerned with management’s ability to monetize the product given execution to date with Sumavel DosePro and Zohydro.

Furthermore, “We find it difficult to ignore that while few companies of Zogenix’s size have taken two drugs through clinical development and received FDA approval, the company has sold the two assets for $185 million, not including future payments, which is clearly not a high return on $462 million in paid-in capital.”

“Overall, the company remains focused on the IND submission for ZX008 (synthetic fenfluramine), to treat Dravet’s syndrome, to the FDA, which it has guided to completion by the end of August. The Phase III program initiation for ZX008 is anticipated for fourth quarter 2015.”, the analyst continued.

According to TipRanks.com, which measures analysts’ and bloggers’ success rate based on how their calls perform, analyst Tim Lugo has a total average return of -2.9% and a 43.2% success rate. Lugo has a -41.2% average return when recommending ZGNX, and is ranked #3136 out of 3729 analysts. 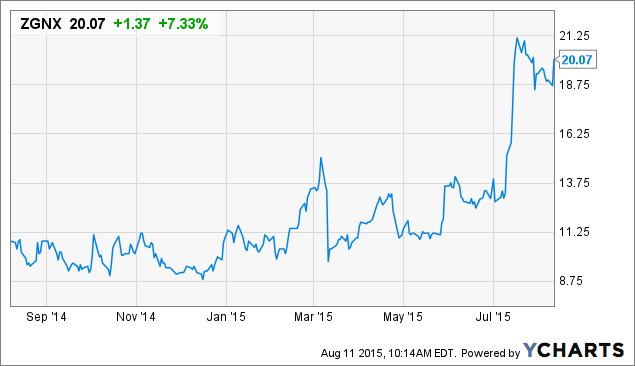