In a research report issued yesterday, William Blair analyst Amy Noblin reiterated a Market Perform rating on Vera Bradley (NASDAQ:VRA). No price target was provided. The report was released following the company’s second-quarter results for fiscal year 2015, posting an EPS of $0.19 which were in-line with Noblin estimates.

Noblin wrote, “Vera Bradley reported an in-line quarter with sales and SG&A ahead of plan, offset by slightly lower gross margin. Third-quarter guidance came in below the Street while full-year guidance was maintained in the range of $1.00-$1.10. The embedded earnings acceleration in fourth-quarter guidance (from 50% year-over-year declines in the second and third quarters to flat to up slightly in the fourth-quarter) will likely keep investors sidelined, although it is predicated on traction with new product, the number of new store openings, increased higher-margin outlet mix, and the lapping last year’s inventory reserve. We are encouraged by the green shoots in the business and the long-range plan, but with the shares trading at 21.0 times 2014 and 18.2 times 2015 estimates, we will look for greater visibility on product traction and earnings before becoming more constructive.”

According to TipRanks.com, which measures analysts’ and bloggers’ success rate based on how their calls perform, analyst Amy Noblin has a total average return of -6.0% and a 42.9% success rate. Noblin is ranked #2903 out of 3277 analysts. 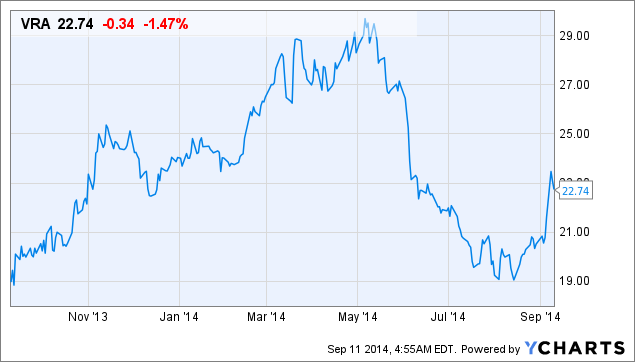