In a research note published yesterday, William Blair analyst Nicholas Heymann reiterated a Market Perform rating on ABB Ltd. (NYSE:ABB) with a $23 price target, following a series of updates on the company’s projects.

Heymann wrote, “ABB continues to make progress resolving the most challenged portions of its power systems backlog involving offshore wind and large solar installations. Of the three offshore wind projects ABB is completing, the first is being connected and poses no further financial risk. ABB’s second wind project is expected to be largely completed this year and poses minimal risk of additional charges. The third offshore wind project is a new design and the platform and power conversion modules are installed onshore, not at sea. While additional charges for this final project (scheduled for completion in 2015) cannot be ruled out, any cost overruns are expected to be minimal. ABB has exited installing large solar installations; 90% of all large solar installations in ABB’s backlog should be completed in 2014. ABB continues to project that power systems EBITDA margin should be back to breakeven in the last quarter of 2014 and potentially back to double-digit levels by 2016. Further detail on power systems is expected at ABB’s London investor day on September 10, 2014.”

Heymann added, “ABB’s largest risk is the time it takes to correct its power systems business, which is targeted to break even by the end of 2014 and should be able to restore its EBITDA margins to their targeted double-digit levels and operating margins to upper-single-digit levels by 2016. ABB also faces increased competitive challenges at its significantly profitable power products business now that Alstom (ALO-PAR €26.74; Market Perform) sold its grid utility products business to GE (GE $26.07; Market Perform), though pricing pressures are expected to subside once Alstom Energy becomes part of GE around mid-2015. While ABB will continue to be influenced by variances in global GDP, and to a lesser extent, material input costs and foreign-exchange variability, the company’s exceptional lead over many of its industrial peers (particularly in Europe) to optimize its global footprint and deploy its capital into smaller, ‘white space’ acquisitions that can generate larger incremental returns more quickly now position the company for stronger growth acceleration sooner than its peers as the global economy stabilizes and gradually begins to rebound. From a perception standpoint, any market sense that China has reached bottom and is beginning to recover is likely to disproportionately benefit ABB’s share price given its above-average 12%-13% of sales in China, almost twice the average of most diversified industrial companies. ABB has lagged recently because of fears about this large exposure to China as well as concerns about the pace of margin improvement at its power systems business. We believe any confusion about the company’s CROI arising from recently expanded acquisitions provides an opportunity on which investors should capitalize as total reported CROI steadily rebounds (assuming no further major M&A activity) to 20% or more by later this decade from the midteens today.”

According to TipRanks.com, which measures analysts’ and bloggers’ success rate based on how their calls perform, analyst Nicholas Heymann has a total average return of 3.3% and a 66.7% success rate. Heymann is ranked #2282 out of 3250 analysts. 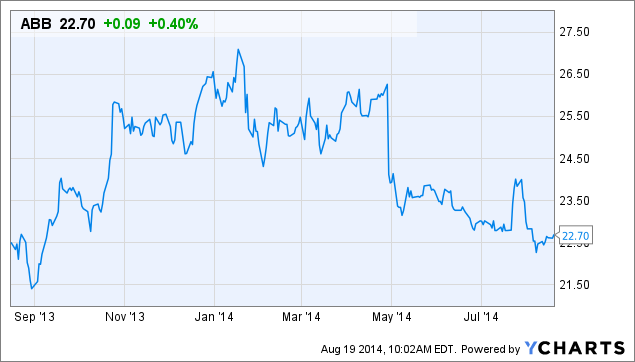