In a research report issued today, William Blair analyst Robert Napoli reiterated a Market Perform rating on Green Dot Corp (NYSE:GDOT), following Green Dot’s 24% increase in its stock value, which came as a result of its announcement that a retail version of its GoBank product would be sold through 4200 Wal-Mart stores. No price target was provided.

Napoli noted, “We believe the prepaid industry remains attractive and continues to grow at a solid midteens rate; however, Green Dot’s revenue visibility remains low, evidenced by the recently reduced revenue guidance to $610 million-$620 million (versus prior guidance of $640 million-$650 million and our estimate of $612.8 million). Increasing competition, along with the revenue ramp-up of new products and the Wal-Mart contract (for the Wal- Mart Moneycard, which represents about 75% of Green Dot’s Wal-Mart revenue) that expires in May 2015, creates risk, in our view.” The analyst continued, “We believe GoBank will generate several revenue streams, including account opening fees, float from deposits, interchange, out-of-network ATM fees, and optional fees (e.g., custom card fees and 3% foreign transaction fees). Management has not disclosed the number of active users, but indicated that active users with over 90 days with the product (a key point for customer retention) generate about $11 per month in revenue for the online version. Further active customers deposit about $1,000 per month and 60% of users use GoBank as their primary account; debit card users have on average 19 transactions per month with about $600 monthly spend. The retail version has an account opening fee of $2.95 and a monthly fee of $8.95, which is waived with direct deposits of at least $500 per month.”

The analyst added, “Broadly we view GoBank as a direct competitor to American Express’s (AXP) Bluebird product, and view American Express’s Serve product as a direct competitor to Green Dot’s core reloadable product. Recall Wal-Mart introduced Bluebird in late 2012 and Serve in April 2014. Green Dot’s revenue from Wal-Mart has been decelerating for six consecutive quarters with revenue falling 12% year-over-year, to 55% of adjusted revenue in the June quarter (versus +3% in the September 2013 quarter, -4% in the December 2013 quarter, and -6% the March quarter). Management has attributed the slowdown to tightening risk controls, the introduction of free ATMs in Wal-Mart, slow ramp-up from new product introduced in late 2013 and various execution challenges (e.g., stock-outs, inefficient merchandising); however, we believe a portion of the slowdown could be driven by increased competition by American Express’s BlueBird and Serve products. Wal-Mart represents less than 5% of Green Dot’s retail doors; the contract expires in May 2015.”

According to TipRanks.com, which measures analysts’ and bloggers’ success rate based on how their calls perform, analyst Robert Napoli has a total average return of 26.1% and a 72.7% success rate. Napoli is ranked #534 out of 3304 analysts. 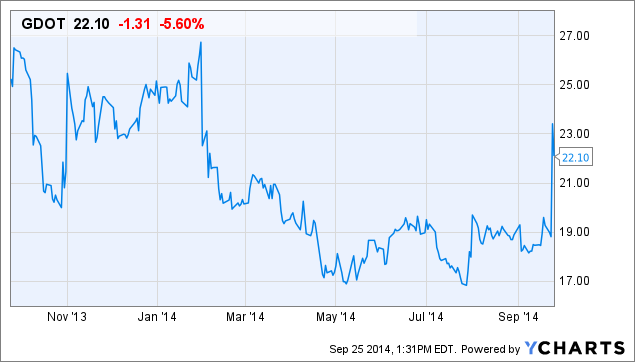