In a research note released yesterday, William Blair analyst Ralph Schackart maintained an Outperform rating on GrubHub (NYSE:GRUB), following investor meetings with GrubHub’s management. In short, Schackart believes that the company had a positive attitude, he said the company is concentrating on increasing its brand awareness and driving diner growth. No price target was provided.

Schackart wrote, “GrubHub’s penetration of takeout and delivery orders (or gross food sales) in its top seven markets (New York, Chicago, Los Angeles, San Francisco, Boston, Washington, D.C., and Philadelphia) is still lower than we expected. We estimate that GrubHub is processing approximately 10% of potential orders in the five boroughs of New York, midsingle digits in Chicago, and 3% or less in the other top markets. We note that the estimate for New York includes the outer boroughs and penetration is potentially twice as high in certain parts of Manhattan. With the majority of orders still being placed over the phone, management believes boosting brand awareness is key to increasing penetration and is addressing this issue with multichannel marketing campaigns.” The analyst added, “GrubHub’s growth in tier-two markets (large cities outside its top seven markets) such as Denver, Phoenix, Miami, and Atlanta is outpacing growth in its top seven markets. We believe the growth profile of many of the tier-two markets is similar to what the company observed for Chicago at a similar point in the market’s life cycle.”

Schackart continued, “We maintain our Outperform rating on GrubHub shares and believe the company is well positioned for growth as it is the clear market leader and possesses a first-mover advantage, strong brand recognition, and an experienced management team. Although it is the market leader, GrubHub still has plenty of runway for growth, in our view. Based on a 2013 Euromonitor International study, GrubHub estimates total takeout and delivery food sales in the United States (from independent restaurants) equaled $67 billion in 2012. Assuming a conservative take rate of 13%, we believe GrubHub’s addressable market was about $8.8 billion, meaning it is only about 3% penetrated.” 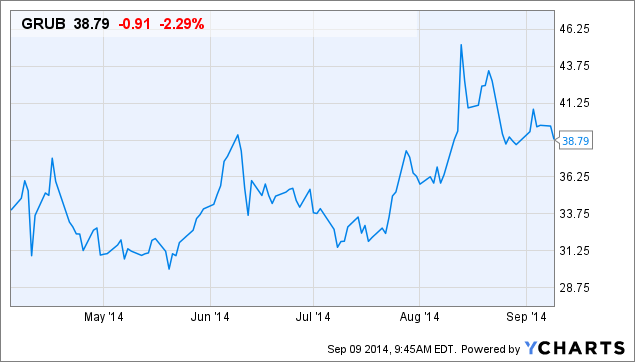