On Friday, William Blair analyst Mark Miller issued a note in which he reaffirmed an Outperform rating on Cabela’s Inc. (CAB) ahead of the upcoming second quarter earnings, which he expects to be in line with the consensus estimates. No price target was assigned.

Miller wrote, “We expect Cabela’s to report second-quarter sales and EPS in line with the consensus estimates, which are near the midpoint of the company’s EPS guidance range of $0.45 to $0.55 and a comp store salesdecline of 10% to 13%”. He continued, “Cabela’s finance business continued to demonstrate strong performance in the second quarter. Receivables at the end of the quarter rose nearly 13% year-over-year (a modest acceleration versus the first quarter), and charge-offs continued to decline. We believe we are nearing the end of the improving charge-off trend, however, as we note that total delinquencies were flat year-over-year in June after steady improvement since the end ofrecession.

The analyst added, “Investor sentiment on Cabela’s has skewed negative over the past few months, and shares areoff 20% since the end of March. Our sense is that some investors misinterpreted Dick’s Sporting Goods (DKS $44.02;Outperform) negative commentary this spring on its lodge business. Dick’s has a different sequential experience this year compared with Cabela’s, as it stopped selling modern sporting rifles in the first quarter of last year, making its second-quarter comparison tougher than the first quarter. Looking to the second half of 2014, we believe Cabela’s comps should be closer to flat in thethird quarter before turning positive in the fourth quarter. Cold weather was a positive forouterwear sales in the fourthquarter of last year, but investors should soon begin to anticipate the positive setup for early 2015 given the late breakto spring this year, which hindered sales in the first quarter”.

According to Miller, one of the investor concerns for Cabela’s is the sharp rebound in profitability anticipated inthe second half. Indeed, the company’s expectation for 30%-plus EPS growth across the third and fourth quarter seems ambitious, although he believes it is not the stretch that it appears on normalizing comp-store sales trends and sequentially easier margin comparisons. Our full-year estimate for 2014 assumes 26% of operating profit is realized in the first half of the year and 74% in the second half. This compares with 40% and 60% in the same periods of 2013. However, when he looks at this contribution over time, the semester progression for this year is consistent with historical experience.

In conclusion, “shares trade at 16.7 times and 14.3 times our 2014 and 2015 EPSestimates, respectively, a level we view as attractive given Cabela’s strong brand appeal and product development capabilities, midteens percentageunit expansion potential, and the improving ROIC profile. Current valuation levels seemingly reflect depressed expectations, and we note that our estimate for 5% EPS growth in 2014 is already below management’s “high single digit to low double digit” guidance. Our sense is that buy-side expectations are lower than that”. 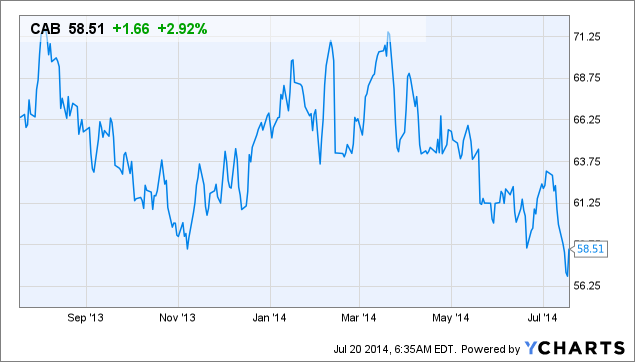