In a research note issued yesterday, William Blair analyst Ben Andrew reaffirmed an Outperform rating on Abbott Laboratories (ABT). The report followsyesterday’s news that Abbott will sell its developed markets branded generics pharmaceuticals business to Mylan Inc. (MYL) in a $5.3 billion deal that includes the formation of a new publicly traded company.

Andrew noted, “Abbott’s developed markets established pharmaceuticals business has been a sore spot for the company, and we expected the business to decline again in 2014 after reporting declining sales the previous two years. While expected to initially be $0.22 dilutive, the sale of the business should allow the company’s results to stabilize and reaccelerate. Its recent acquisition of CFR Pharmaceuticals is expected to be $0.07 accretive, which should help offset the dilution from the divestiture.

While the deal is all equity (Abbott will own 20% of the new Mylan), we expect Abbott to ultimately liquidate its position to better focus on increasing its exposure in fast-growing emerging markets. Acquisitions remain a solid candidate as a use of cash, and we believe the company has a number of candidates to consider. Regardless, we believe the deal gives the company a significant amount of flexibility for the business”.

According to TipRanks.com, which measures analysts and bloggers success rate based on how their calls perform, analyst Ben Andrew currently has a one-year average return of 7.9% and a 67% success rate. Andrew is ranked #1513 out of 3215 analysts. 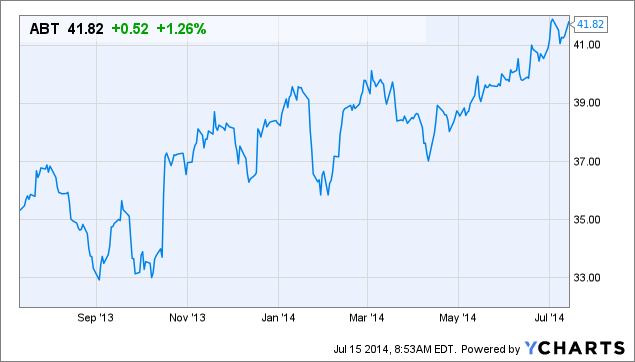