In a reaction, William Blair analyst Tim Lugo yesterday reaffirmed an Outperform rating on ZGNX but lowered his price target to $3 (from $5).

Lugo wrote, “Although the timing of a management change at the same time of the negative formulary decision is likely not a coincidence, we believe Mr. Shively has left Zogenix to join another company in a similar role. And while the political noise surrounding the Zohydro launch apparent earlier in the year has decreased following several public statements of support for the product by FDA senior administrators, the move by Express Scripts is a clear setback”.

Lugo continued, “While we are concerned with how the Express Script decision will affect Zohydro sales in 2015, there have been some positive developments for the company, including the potential for Zogenix to bring an abuse deterrent formulation (ADF) of Zohydro to the market during the year. After a recent meeting with the FDA, the company has been advised that it may expedite its plans to bring an ADF Zohydro to the market with a supplemental NDA filing by October 2014. If approved, the ADF Zohydro could be available by early 2015, and given the coverage decision by Express Scripts for the tamper-resistant formulations of OxyContin, we believe the launch of a tamper-resistant formulation of Zohydro may provide a good time for readdressing coverage by the formulary”.

The analyst concluded, “We are decreasing our price target to $3 from $5 as we have taken our peak-year Zohydro sales estimates from $250 million down to $175 million as well as adjusted for our estimate of current cash and debt balances. We note that our price target does not incorporate any value for Relday, which will read out top-line data in the third quarter of 2015 and may enter Phase III studies in firstquarter 2016. Given our beliefthat the sum of the assets atZogenix is greater than the current market value of shares, despite a slower-than-anticipated launch of Zohydro, we maintain our Outperform rating on shares of Zogenix”. 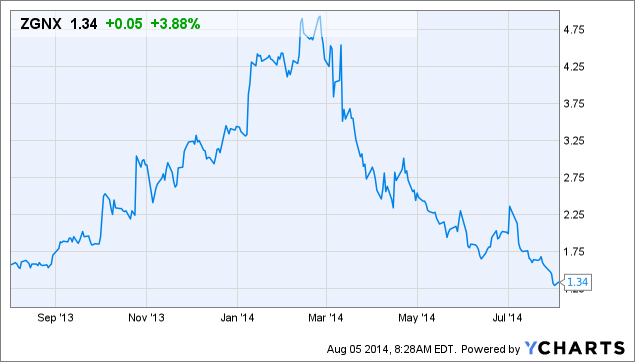 Is the Worst Over for Zogenix (ZGNX) Stock?