Heymann wrote, “Our visit last week with UTC management at the company’s Hartford headquarters was reassuring, though it highlighted the company’s need to expand its exceptional work on costs to increasing its revenue growth. UTC remains solidly on track during a transitional year for the company to achieve its full year 2014 sales and earnings targets. Total orders overall are not expected to be particularly strong over the remainder of 2014, but UTC management noted order trends for building and industrial systems (BIS) in China improved during the summer, with year-to-date orders through the end of July 2014 now down about 13%-14%, an improvement from a decline of 19% through the end of May. While BIS’s China sales in 2014 remain on track to rise about 10% based on strong backlogs in place at the beginning of 2014, sales in 2015 appear likely to decline, though it remains too soon to determine by how much. At about $4.1 billion, BIS’s China 2014 sales represent about 6.3% of UTC’s total estimated 2014 sales of about $65 billion. If BIS’s China sales were to decline 10% in 2015, it would reduce UTC’s overall sales slightly more than half of one percent. While there could be a disproportionate impact on Otis’s China sales, we still estimate that even a 20% decline in BIS’s China sales would reduce our currently estimated $68.2 billion in sales by only slightly more than 1% (our current 2015 UTC model, which projects organic sales growth of almost 5%, assumes BIS’s China 2015 sales are flat). Our sense is that the company is working to minimize the impact of any decline in BIS’s China sales on earnings while simultaneously working to find other incremental sources of growth to mitigate the impact on the company’s 2015 performance. As a result, we view this is issue as a transitional one that should not be a reason for extensive concern but rather one that should be monitored over the remainder of 2014, particularly regarding BIS’s China backlog levels.”

According to TipRanks.com, which measures analysts’ and bloggers’ success rate based on how their calls perform, analyst Nicholas Heymann has a total average return of 3.3% and a 66.7% success rate. Heymann is ranked #2310 out of 3291 analysts. 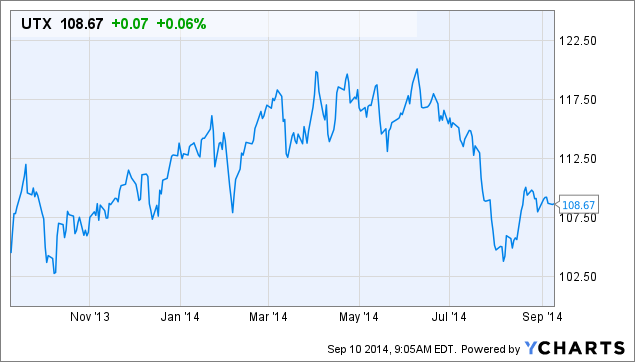