Heymann wrote, “In the company’s second-quarter results, while a significant portion of the operating margin degradation was attributable to recently announced accelerated restructuring at the company’s Aerospace and Hydraulics businesses, the deceleration in Eaton’s organic sales growth to 3% from 4.5% in the prior quarter was unsettling. The surge in logistics costs, adverse sales mix and more challenging pricing at ES&S was also not anticipated. Unfortunately, management noted that many of these factors are likely to persist and remain a headwind for ES&S’ performance in the second half of 2014”.

The analyst added, “We assume the company will achieve the notable step-up in its revenue growth to 5% from year-earlier levels during the second half of 2014, from just 3% in the first half. Given the deceleration in Eaton’s organic growth to 3% during the second quarter from 4.5% in this year’s first quarter, it’s highly understandable that this might seem a bit of a stretch. However the company indicated it had its best orders for ES&S (up 6% from year-earlier levels during the second quarter) in six quarters. Excluding operational execution, we believe the stock’s 8% decline following results was more about the limited alternatives facing Eaton at least through the end of 2015 or early 2016 if, as the CEO indicated, the ability to potentially unlock $10-$12 per share from a tax-free spin-out of the company’s Vehicle business now will have to wait until late 2017”.

According to TipRanks.com, which measures analysts’ and bloggers’ success rate based on how their calls perform, analyst Nicholas Heymann has a 3.3% average return and a 66.7% success rate. Heymann is ranked #2241 out of 3189 analysts. 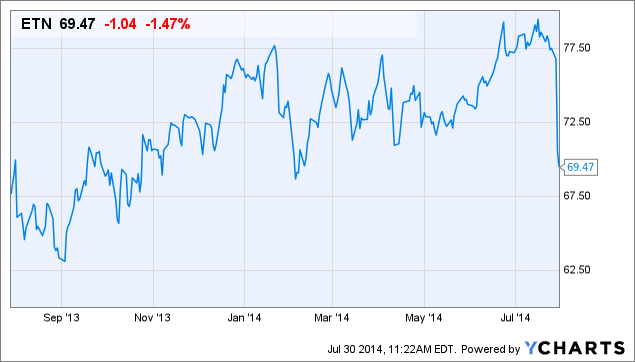 Oppenheimer Moves To Sidelines On Eston; Rating Cut to Perform