On Sunday, August 24, Roche (RHHBY) and InterMune (NASDAQ:ITMN) announced that a definitive merger agreement has been reached under which Roche will acquire InterMune for $74 per share, or $8.3 billion in value, in an all-cash transaction. This represents a 38% premium to Friday’s closing of $53.80 per share.

In reaction, William Blair analyst Y Katherine Xu issued a note today in which she maintained an Outperform rating on ITMN and raised her price target to $74 (from $55).

Xu wrote, “In our valuation note published on May 21, we outlined a blue-sky scenario for InterMune valuation at $75 per share. Further, in the merger scenario, synergies will be achieved at least on the SG&A expense line since Roche already has a pulmonary franchise. Lastly, we believe InterMune’s pipeline targeting fibrotic diseases is valuable to Roche as well, although the Street does not ascribe any value to it. As a result, the $74 per share takeout price is not surprising to us.”

The analyst added, “Major catalysts for the next 18 months include: 1) potential FDA approval of Esbriet by November 23, 2014; 2) potential U.S. launch of Esbriet during fourth quarter 2014; 3) top-linedata of Esbriet from Phase II LOTUSS study in early 2015; 4) update to Esbriet’s Summary of Product Characteristics(SmPc) by the EMA in early 2015; 5) an FDA decision regarding nintedanib expected inJanuary 2015; 6) and the initiation of clinical trials of pirfenidone analogs in 2015.”

According to TipRanks.com, which measures analysts’ and bloggers’ success rate based on how their calls perform, analyst Y Katherine Xu has a total average return of -15.9% and a 31.3% success rate. Katherine has a -54.2% average return when recommending ITMN, and is ranked #3193 out of 3260 analysts. 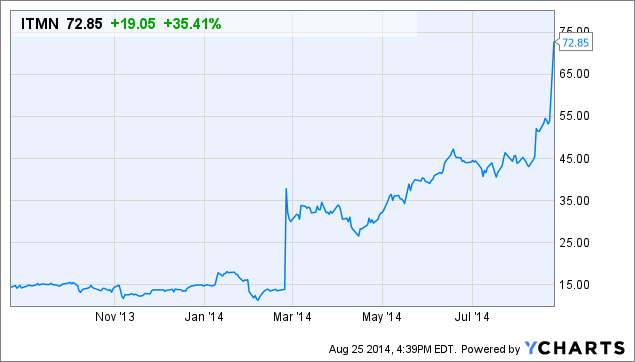