In a research report published today, William Blair analyst Tim Lugo reiterated an Outperform rating on shares of Sarepta Therapeutics Inc (NASDAQ:SRPT) with a price target of $43, after the company announced that the FDA has accepted the NDA for eteplirsen for the treatment of Duchenne muscular dystrophy, and granted eteplirsen priority review status, conferring a PDUFA date of February 26, 2016.

Lugo wrote, “We view this announcement as an incremental positive for the company and a culmination of the back-and-forth between Sarepta and the agency over the data necessary for a filing. Last year the FDA submitted correspondence to Sarepta asking for additional clinical studies and data to support an NDA submission.”

“We note that we are entering what will likely be the most important several months in the company’s history, as we expect presentation of the company’s week 192 data, fourth biopsy results, and natural history at the World Muscle Society meeting in September. This leads into what will be a highly watched Advisory Committee, though likely contentious and likely lead to dramatic price swings (50%-100%) in the company’s share price. However, we ultimately believe the company’s review will be positive given the severity of the disease, signals of efficacy to date, ongoing confirmatory studies that may be available by late 2016, and a relatively clean safety profile for eteplirsen,” the analyst added.

According to TipRanks.com, which measures analysts’ and bloggers’ success rate based on how their calls perform, analyst Tim Lugo has a total average return of -8.6% and a 33.3% success rate. Lugo has a -0.7% average return when recommending SRPT, and is ranked #3448 out of 3730 analysts.

Out of the 16 analysts polled by TipRanks, 9 rate Sarepta Therapeutics stock a Buy, while 7 rate the stock a Hold. With a return potential of 1.1%, the stock’s consensus target price stands at $34.55. 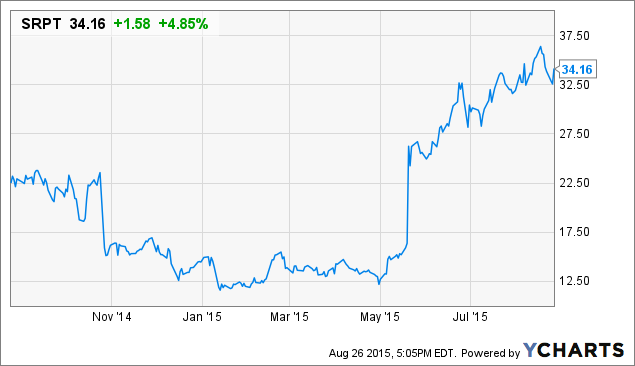