William Blair analyst John Sonnier came out with his views on Exelixis, Inc. (NASDAQ:EXEL), after hosting  meetings with the company’s management. The analyst rates Exelixis shares an Outperform, without providing a price target.

Sonnier observed, “In the wake of recent meetings with Exelixis management, we underscore our view that the company is entering a formative three- to four-quarter window, which stands to fundamentally change its investment profile. In our opinion, the current valuation of Exelixis shares does not appropriately reflect the underlying value of the company, and we expect this to become increasingly apparent by late this year and in early 2016.”

The analyst continued, “We reiterate our view that significant regulatory and clinical risks have been removed from Exelixis’s two key products and our view that the company’s shares are undervalued at current price levels, which together form the basis of our Outperform rating. Given that cabozantinib’s peak annual sales in second-line RCC could reach or even exceed $500 million and by applying a modest multiple of 5 times (based on the de-risked nature of the compound), we believe the economic potential alone in RCC holds greater economic potential than the company’s current market capitalization.” 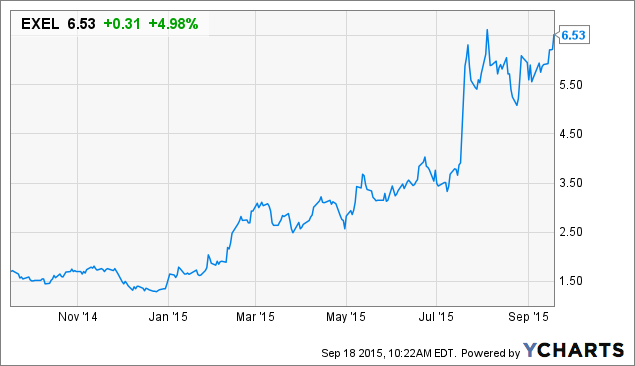