William Blair’s healthcare analyst John Sonnier weighed in with a few insights on Agenus Inc (NASDAQ:AGEN), as the company yesterday announced a transaction with an investor group for the right to receive future royalty revenue on sales of vaccines containing Agenus’s QS-21 adjuvant from GlaxoSmithKline. Agenus will receive $100 million upon the closing of the deal, with an option to receive an additional $15 million following approval of the shingles vaccine.

Sonnier wrote, “We see the structure of the transaction as unique since it enables Agenus to maintain ownership of the underlying assets (the GSK vaccine royalties).” Moreover, “We like that the interest obligations for Agenus do not begin until commercialization of the GSK vaccines begins.”

“The transaction provides Agenus with the necessary capital to expedite the development of its novel immunooncology pipeline. Agenus’s pipeline of immuno-oncology compounds now includes seven disclosed checkpoint modulators targeting CEACAM1, PD-1, CTLA-4, TIM-3, LAG-3, GITR, and OX40. Agenus previously stated its plan to submit IND applications for at least two checkpoint inhibitors by the end of this year and initiate Phase I trials in 2016. Due to the significant investor focus on the space of immuno-oncology and checkpoint modulators, we believe this deal should increase interest in Agenus and allow Agenus to push forward and potentially expedite the development of one or more of its novel checkpoint modulators,” the analyst added.

The analyst reiterated an Outperform rating on Agenus shares, while no price target was provided. 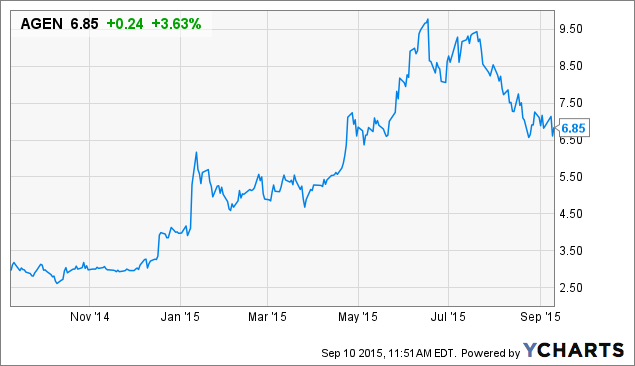