William Blair analyst Nicholas Heymann weighed in with a few thoughts on General Electric (NYSE:GE), as the company reported fourth-quarter earnings results. The analyst reiterated a Market Perform rating and raised the price target to $29 (from $28) on GE shares.

Heymann wrote, “The fear prior to GE’s release of its fourth quarter 2014 earnings was highly pervasive throughout the investment community. However, the expectation that GE might have to reset it 2015 EPS guidance was proved inaccurate while the consistency of the company’s quarterly operational execution was better than projected. Still, the headwinds from a stronger U.S. dollar are likely to rise over the next few quarters just as the impact of lower oil prices on the company’s oil and gas business (17% of 2014 sales) is expected to become more pronounced.”

The analyst added, “Coming at a time when adverse foreign exchange and lower oil prices are likely to begin to more significantly impact GE’s performance, we sense that the stock is likely to remain in a mid-$20s trading range until a bit later in 2015. By midyear, the impact of the stronger U.S. dollar will be much better understood, while the expected curtailment in sales for oil and gas should be able to be much more clearly assessed.” 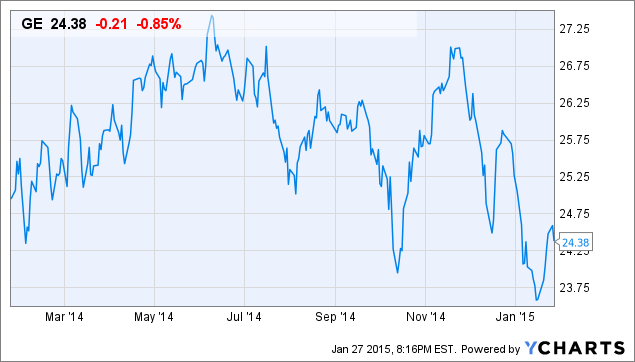