Yesterdays, analyst Mark Miller of William Blair published a report in which he maintained an Underperform rating on Target Corp. (NYSE:TGT) stock. The report  follows the release of the company’s second-quarter financials. No price target was given.

Miller said: “Target reported second-quarter comp sales and EPS in line with its revised outlook provided on August 5. Adjusted EPS of $0.78 declined 21% versus $0.98 last year, driven primarily by gross margin weakness from increased promotion in the U.S. and the clearance of excess inventory in Canada.” And concludes: “The better sales trends, however, seem to be coming at the expense of margins. The company reduced its full year adjusted EPS outlook to a range of $3.10 to $3.30, down from its prior range of $3.60 to $3.90. While the current consensus forecast of $3.47 already reflected part of this revision as a result of the company’s preannouncement on August 5, the magnitude of reduction was worse than expected. The company’s third-quarter EPS outlook of $0.40 to $0.50 is $0.20 below the current consensus estimate of $0.65 and represents an 11% year-to-year decline at the midpoint.“ 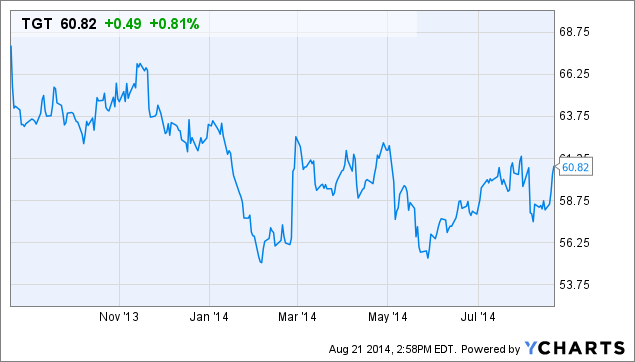