In a research report released today, William Blair analyst Lawrence De Maria maintained an Underperform rating on Deere & Company (NYSE:DE) with a $75 price target, following De Maria’s visit to Brazil, where he visited the parts facility depot, the backhoe and loader plant, and the Deere-Hitachi excavator plant. He also had meetings with senior management in agriculture and construction at the company’s regional headquarters.

De Maria wrote, “We were immersed in Deere’s agriculture, construction, and forestry businesses. We visited Deere’s parts facility depot, the backhoe and loader plant, the Deere-Hitachi excavator plant, and then had meetings at regional headquarters with senior management in agriculture and construction. Brazil falls into Deere’s Region 3 for marketing purposes, which encompasses Mexico plus Latin America. Region 3 sales in 2013 were $4.3 billion, up from $1.6 billion in 2007. Deere has 10 factories, over 650 dealer locations, and 10,000 employees in Region 3. In the next year, regional margins begin to expand with higher volumes and because of reduced import tariffs and financing costs. Emissions costs in the United States may stay elevated through 2015. Tier-4 final emission standards were put in place in 2014 in North America but Deere has used credits to stagger the true launch. Construction represents a solid long-term opportunity though the current market is soft. Deere also markets Hitachi mining equipment through some of its distribution channel and will make a bigger push in this area in coming years. Deere has been in Mexico for 60 years and Argentina since 1959. In contrast, Deere started in Brazil with joint ventures in the 1970s and did not have a wholly owned presence until 1999 when it bought out its joint venture partner. Deere does not believe the upcoming elections will have too much of an impact on the local market, though there probably will be a three- to six-month vacuum as large infrastructure companies await visibility. This is typical in Brazilian election cycles and should normalize in a quarter or two following elections. Deere is targeting market share expansion versus its key rivals such as Caterpillar and Volvo.”

The analyst continued, “Deere is ready to take on big players in construction. Deere now offers a relatively full line of both locally produced and imported equipment and will have more products by year-end within those categories. In addition to the backhoes, loaders, and excavators, Deere imports dozers and motor graders to round out the lineup. Deere to some degree is competing on price with high quality products as it tries to grow share and build the business organically. Not surprisingly, for a company of Deere’s quality, the factory operations were on par with the North American operations. Deere also built out its distribution and has five full dealers now. With a premium product and distribution, Deere can now take on Caterpillar and Volvo for upmarket construction equipment. By 2018, Deere is targeting to be a top-three player in the industry in Brazil. This would imply up to about 20% market share and about a $1.0-plus billion revenue opportunity if successful. The largest player in Brazil has 30% to 35% share. The Brazilian factories will eventually also serve the rest of Latin America, which would take pressure off of the facilities in Dubuque and Davenport, Iowa.” 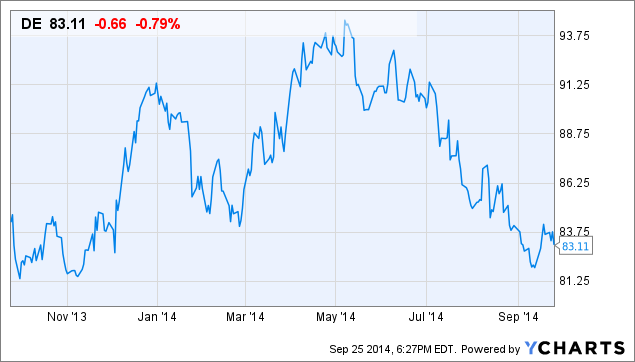