In a research report released yesterday, William Blair analyst John Sonnier maintained an Outperform rating on Threshold Pharma (NASDAQ:THLD), in light of the news that Independent Data Monitoring Committee (IDMC) analyzed the planned interim efficacy and safety data and recommended the Phase III trial with TH-302 in soft-tissue sarcoma to proceed, in line with Sonnier’s expectations. No price target was assigned.

Sonnier noted, “The primary endpoint of the trial is overall survival. Last year, Threshold increased the enrollment size to 640 from 450 patients, which we believe could enhance the chance of success. The company aims to detect a 33% increase in the death hazard ratio, corresponding to a median overall survival of 16 months (TH-302 plus doxorubicin) versus 12 months (doxorubicin alone). The design of the trial is illustrated in exhibit 1. We continue to be optimistic that the powering of the trial will demonstrate a statistically significant difference at 434 events, which the company now projects will occur in the second half of 2015, revised from the previous mid-2015 guidance.”

The analyst added, “Threshold ended last quarter with $75 million in cash and no debt. To date, Threshold has received $110 million in upfront and milestones payments from partner Merck KGaA (MRK.DE €72.86) for the development of TH-302, which in our view offers further evidence of the value in Threshold’s technology platform and in TH-302. We highlight the next 12-24 months as highly catalyst-rich as we expect two Phase III trial readouts in soft- tissue sarcoma (TH-CR-406 trial) and in pancreatic cancer (MAESTRO trial).” 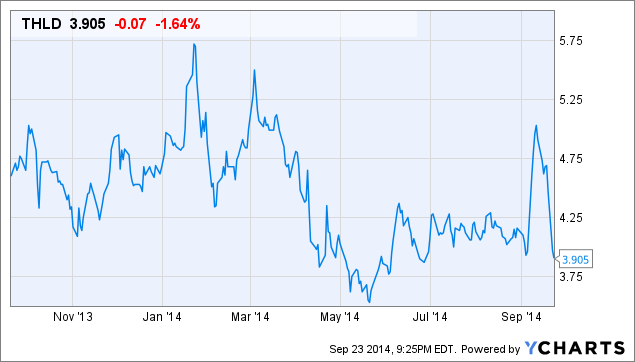