Zackfia noted, “Same-store sales declined 1.6% against a 3.0% comparison, below our and the consensus estimates for an approximate 1% increase, inclusive of a 70-basis-point penalty tied to the shift of Easter into April. We estimate an average check gain of roughly 1.5% was more than offset by a 2.4% traffic decline in the quarter, adjusting for the Easter shift and worsening from an estimated 0.7% traffic decline in the first quarter after adjusting for weather and the Easter shift”.

Zackfia continued, “At just over $12 in the aftermarket, Potbelly’s shares trade at just over 8 times our 2015 EBITDA estimate. While we are disappointed by the company’s same-store sales struggles, we also believe new 2014 guidance has been set at achievable levels, which, combined with a high short interest, should provide some support to the stock in the near term. Although we do not believe a silver bullet initiative exists to regain positive traffic growth, we see the potential for upcoming easier comparisons (beginning in earnest in October) to bolster sales trends”.

According to TipRanks.com, which measures analysts and bloggers success rate based on how their calls perform, analyst Sharon Zackfia currently has a one-year average return of 34.3% and a 67% success rate. Zackfia has an average return of -18.3% when recommending PBPB, and is ranked #338 out of 3211 analysts. 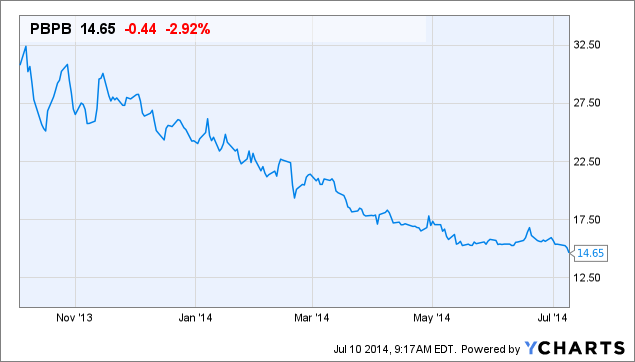