Murphy noted, “MyRisk was a bright spot in the quarter; myRisk revenues were $27.3 million, up 89% sequentially. The company expects to test 100,000 patients in 2015 and ended the quarter with 30% of incoming samples as myRisk. Assuming a $3,000 ASP suggests $300 million of myRisk revenue in 2015, which is far higher than the $100 million we had projected. Management is focused now on signing long-term contracts for myRisk and has contracts covering 80 million lives (or 25% of the total). Myriad obtained a three-year contract with Blue Cross Blue Shield (Myriad still has to get each affiliate on board, however), which also appears to include update testing. BCBS and UnitedHealth represent half of the company’s commercial revenue. A full commercial launch is expected in the fall.”

The analyst added, “There are a number of moving parts that are making it increasingly difficult to evaluate the health of the business. We continue to believe in the company’s ability to convert the business to the myRisk assay (as evidenced by Myriad’s ongoing success in signing long-term payer contracts, which include some level of updated testing). The transition is somewhat lumpy as the company continues to build capacity to ramp up to full commercial launch and manage longer turnaround times vis-à-vis the legacy BRCA1/2 business. Management continues to suggest that pricing of the hereditary breast cancer franchise should not change meaningfully (with the exception of the Medicare rate change), as evidenced by underlying gross margin expectations, which appear to be flat year-over-year (after excluding Crescendo). If this is true, then guidance appears very conservative to us, setting up the company well for 2015 and aided by the potential for Prolaris reimbursement coverage.” 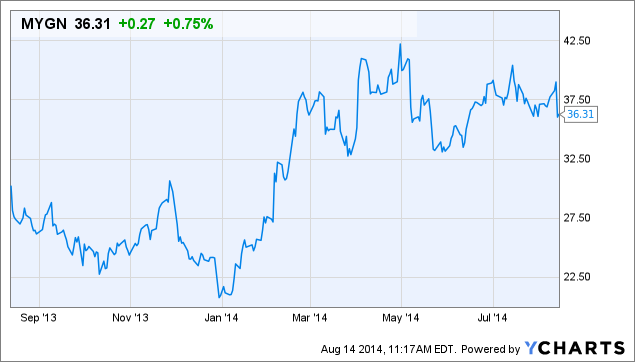