In a research report issued today, William Blair analyst Ben Andrew assigned an Outperform rating on Intuitive Surgical (NASDAQ:ISRG). No price target was provided. The report followed last weeks’s expert dinner with the co-director of one of the largest robotic hospital programs in the United States.

Andrew observed, “We expect it to drive upside to both our system and procedure revenue targets likely beginning in the third quarter, but extending over several years. He indicated that the Xi is attracting attention from a wide range of surgical services including general surgery, pediatrics, transoral, and orthopedics (for soft tissue). Further, they hope to place several in their new ambulatory surgery centers, supporting our view that ASCs represent a new and large opportunity for Intuitive Surgical. Our guest also indicated that the competitive dynamic is unchanged, with the two often- discussed single port systems representing a quite limited threat to Intuitive’s broad and highly sophisticated ecosystem. Launch of the da Vinci Xi has significantly widened the gap, and as Intuitive is increasingly embedded in hospital infrastructures and physician training, the barriers to entry will only grow, absent a major technological breakthrough by others. Finally, the multiple regulatory barriers to launch and adoption should give us long sight lines to potential competition. “

And concluded: “The stock trades at 27 times our 2015 non-GAAP EPS target of $17.53, but we rate the shares Outperform given the potential for upside to near-term targets, as well as the durable 10% top-line and 15% bottom-line growth we expect over the next five years.” 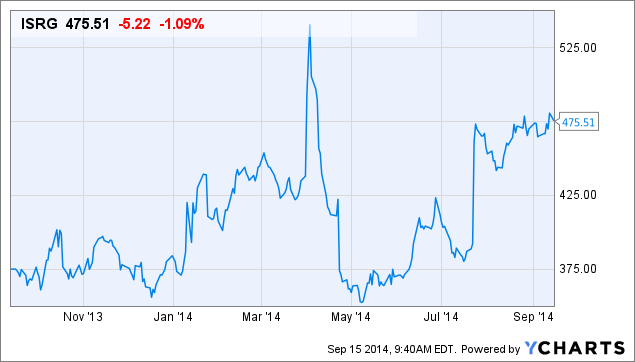