In a research note released yesterday, William Blair analyst Ben Andrew maintained an Outperform rating on Intuitive Surgical (ISRG) ahead of the upcoming second-quarter results. The company will report the results on Tuesday, July 22, after the close. No price target was given.

Andrew observed, “Given the still-recent launch of the new Xi system, potential impact of the morcellation controversy, and our estimates of last quarter’s procedure growth, we believe the company will report a light system number and an in-line procedure estimate”. He continued, “Conclusions and Stock Thoughts. While our research indicates a growing opportunity in a number of procedures within general surgery, we believe visibility into system placements will remain poor in the near term as several impediments to adoption discussed in recent quarters have not eased and the full instrument lineup is not yet approved for the Xi. As a result, we are lowering our revenue estimates for the second quarter and for 2014 to account for lower system placements”.

The analyst added, “Given the one-time nature of waiting on product approvals for the Xi, we place more of a focus on procedure growth this quarter. While there are a number of risks here (the FDA comment period for morcellation, for example), we believe procedures should be able to meet guidance and we are maintaining our estimate of 5.9% growth this quarter. With the FDA panel on morcellation behind us, the ongoing launch of the surgical stapler (a key catalyst for general surgery procedures), and easier comparisons in hysterectomy, we expect to see more of a turn in procedure growth in the third quarter (we model 7.3% growth)”.

According to TipRanks.com, which measures analysts and bloggers success rate based on how their calls perform, analyst Ben Andrew currently has a one-year average return of 6.9% and an 60% success rate. Andrew has a 3.9% average return when recommending ISRG, and is ranked #1523 out of 3217 analysts. 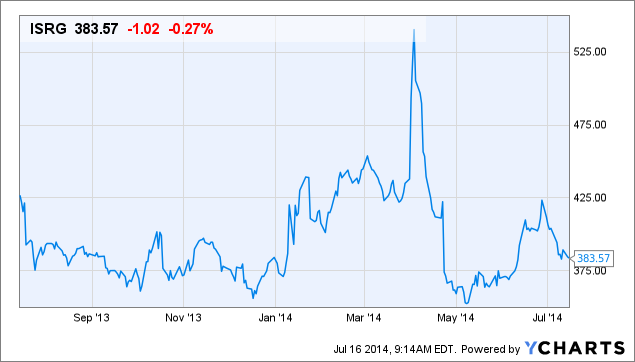