“Shares closed Thursday at 14.2 times our fiscal 2015 EBITDA estimate of $776.6 million and 21.1 times our fiscal 2015 EPS estimate of $6.46, levels we view as appropriate, given our confidence in a modest acceleration in growth, slight but persistent improvements in free cash conversion, and the predictability and competitive moat of IHS’s business model. We believe the buy-side’s estimates are above ours (and consensus) but not so far above ours that results and commentary in the coming quarters will not be sufficient for the stock to keep grinding higher. We would be a bit more nervous toward 25 times 2015 adjusted EPS (above $160) given the implications for upside to consensus EPS that valuation would imply, but would also use any market-driven weakness that caused the stock to retrace recent gains (i.e., back to $120 or below) to be more aggressive in putting new money to work”, Dobell wrote.

According to TipRanks, which measures analysts and bloggers success rate based on how their calls perform, analyst Brandon Dobell currently has a one-year average return of 26.1% and a 58% success rate. He is ranked #504 out of 3118 analysts. 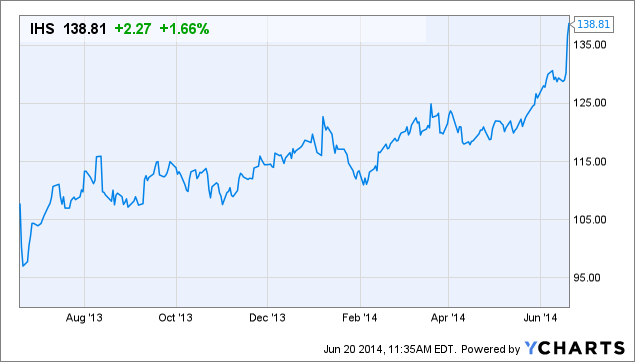