In a research note released yesterday, William Blair analyst Bhavan Suri maintained an Outperform rating on Citrix Systems (CTXS) amid expectations of 2Q14 results. Suri expects the company to announce reasonable second-quarter results, roughly in line with expectations on the top line and probably slightly ahead of consensus estimates on the bottom line. No price target was assigned.

Suri wrote, “Despite the increased marketing noise from VMware, we continue to believe that Citrix remains well positioned to win its fair share in the mobile device management and desktop/application virtualization markets and that the CSP provider business has the potential to drive nice upside. Although VMware has deeply discounted its desktop virtualization product to get more exposure in the market, Citrix’s offering remains much more competitive in deals over 1,000 seats, winning about 80% of these large enterprise deals, based on our surveys. In addition, Citrix’s mobile application management (MAM) offering within XenMobile contains superior features and functionality when compared with VMware’s AirWatch product”.

The analyst continued, “Still, we believe yesterday’s Apple (APPL)/IBM (IBM) partnership announcement does pose an incremental long-term competitive threat to the XenMobile business. Apple and IBM plan to leverage IBM’s consulting organization to develop user-friendly business applications for iOS in an effort to sell iPhones and iPads to IBM’s corporate customers. The two companies are teaming up to develop over 100 applications, which will start becoming available this fall. Further, the partnership will include IBM’s cloud service management around mobile device management, security, analytics, and mobile integration”.

According to TipRanks.com, which measures analysts and bloggers success rate based on how their calls perform, analyst Bhavan Suri currently has a one-year average return of 5.4% and a 47% success rate. Suri has a 38.3% average return when recommending CTXS, and is ranked #1407 out of 3215 analysts. 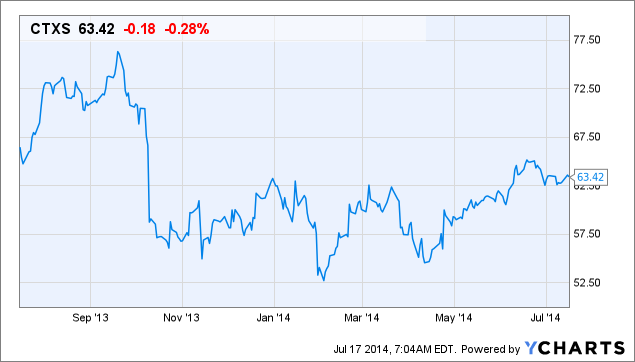