In a report issued yesterday, William Blair analyst Bhavan Suri provided an optimistic view on Citrix Systems (CTXS) in light of Friday’s news that the company’s CMO Steve Daheb is leaving. The analyst maintained an Outperform rating on CTXS. No price target was assigned.

Suri added “We suspect that Mr. Templeton, who had run marketing before becoming CEO, will engage himself more directly in customer-facing initiatives. Weremind investors that Mr. Templeton was a key driver behind the company’s past success with desktop virtualization, XenApp, and growing the NetScaler businesses. We suspect that the key marketing components will report either directly to Mr. Templeton or, in the case of product marketing, to Sudhakar Ramakrishna”.

Suri added, “While the changes that are taking place may not affect near-term margin (especially given that Mr. Daheb will remain as a consultant though February 2015), we suspect that management understands the need to return to a more normal operating model (the company has had non-GAAP operating margin above 25% just three years ago and over 28% further in its past). We understand investor frustration that a company spending 40% of revenue on sales and marketing should be growing faster than 10%, and suspect that the company will drive some margin upside over the next two to three years”. 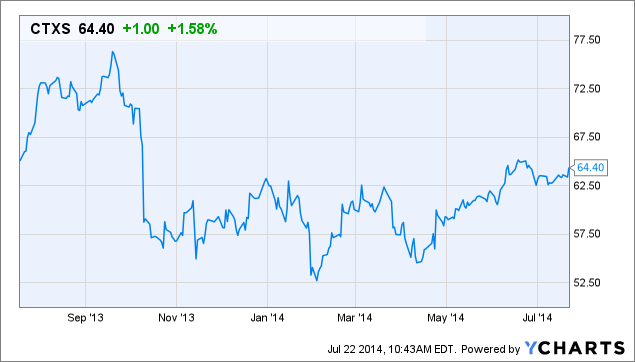