Tuesday afternoon, Bacterin International Holdings (BONE) released second-quarter results following the company’s better-than-expected preannouncement in July; a conference call to discuss the results was held Wednesday morning. Revenues for the quarter came in a bit above the high end of the company’s preannouncement range, and operating loss was also slightly better than expected.

In reaction to the results, William Blair analyst Matthew O’Brien today maintained an Outperform rating on BONE.  No price target was assigned.

O’Brien noted, “The company continues to make progress with its salesforce and now has 33 direct sales representatives, a ramping president and vice president of sales, and we believe that the momentum and productivity improvements in the salesforce should lead to steady and improving growth over the course of the year and into 2015. As the newer reps ramp up, there will be a steady increase in revenue, with the company citing that $250,000 per rep is achievable after 6 months. The company expects to have 50 sales reps in place by mid-2015, and to exit the year delivering $12.5 million in sales per quarter.”

The analyst concluded, “We are pleased to see the momentum behind the salesforce, and while we expect quarterly results will remain bumpy, the steady sequential improvements and more stability in results will likely push the stock higher from here in the coming years. We continue to believe Bacterin has developed a unique portfolio of products that make the asset worth more than its current market capitalization of roughly $35 million, which keeps us recommending the stock at these levels. Consequently, we believe patient investors should start or add to positions in the name.” 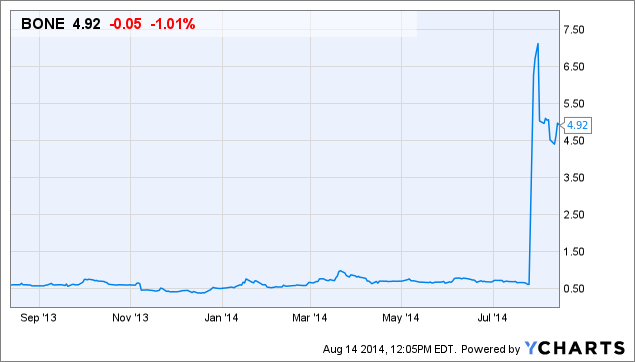 Bacterin: William Blair Recommends Buying The Stock At These Levels