Napoli wrote, “June-quarter results were largely in line with our expectations; with spending growth accelerating, increased investments offset the gain from JV in the travel business. June-quarter EPS rose 13%, to $1.43 (versus our $1.45 estimate and the Street’s $1.39); return on tangible equity was 35.8% (versus 35% in the March quarter). Revenues rose 5% year-over-year, to $8.66 billion (versus our $8.67 billion estimate); on a constant-currency basis, revenues rose 5.2% year-over-year (even with the March quarter). Excluding investments, operating expenses remain well controlled, rising 2% year-over-year on a foreign-exchange-adjusted basis and are flat on a year-to-date basis; the company appears comfortably on track to meet its goal of growing nonmarketing expenses less than 3% in 2014 and 2015”.

The analyst added, “We believe the company is well positioned as a payments innovator to grow over the long term in the rapidly evolving payments landscape. American Express is valued at 15.0 times our 2015 EPS estimate, slightly below the prerecession average and the S&P 500. We believe American Express shares are worth a one- to two-multiple-point premium to the S&P 500”.

According to TipRanks.com, which measures analysts’ and bloggers’ success rate based on how their calls perform analyst Robert Napoli has a 34.8% average return and a 62.5% success rate. Napoli is ranked #558 out of 3190 analysts. 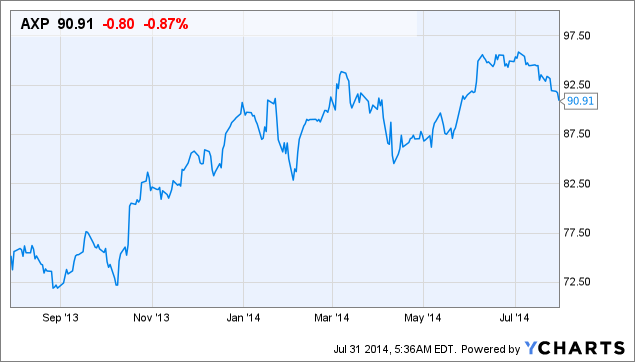