In a research report released Friday, William Blair analyst Mark Miller maintained an Outperform rating on Amazon (AMZN), following AMZN’s June sales trends which were recently leaked by a third-party source. In this report it was written that sales had accelerated to 34.4% in June from 28.1% in May. No price target was assigned.

Miller noted, “Over time, growth has moderated, decelerating to levels that are closer to the company’s reported revenue growth. However, the most recent ChannelAdvisor data indicates that third-party sales growth has reached an inflection point, reaccelerating for the first time in three years. This is a good indication that North American revenue could see a similar acceleration in the second quarter”.

Miller continued, “We view enterprise-value-to-gross-profit as the best valuation yardstick for Amazon, as gross profit is the pool from which the company can invest. On this basis, shares trade at 5.6 times our 2014 gross profit projection, versus a five-year historical average of 6.3 times”.

According to TipRanks.com, which measures analysts and bloggers success rate based on how their calls perform, analyst Mark Miller currently has a one-year average return of 3.7% and a 56% success rate. Miller is ranked #1472 out of 3212 analysts. 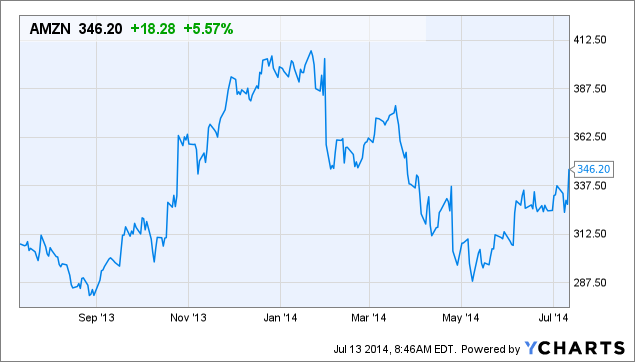