Xu wrote, “SD-101 is a wholly owned, second-generation Toll-like receptor 9 (TLR9) agonist that stimulates the innate immune system to recognize and target cancer cells. The activation of the immune system causes the release of type I interferons, which stimulate macrophages and natural killer cells to attack tumor cells. When injected locally into a lesion, it is hypothesized that the immunomodulatory effects of SD-101 will target tumor cells systemically.” The analyst continued, “The multicenter study, LYM-01, will be testing the safety and efficacy of SD- 101 in 25 patients with untreated, low grade B-cell lymphomas who are candidates for the “watch and wait” approach and do not yet require systemic therapy. The five weekly intratumoral injections of SD-101 at doses of 1, 2, 4, or 8 mg will be given subsequent to local radiation over two days. The primary objectives of the study will be safety, pharmacodynamics (interferon-inducible genes in whole blood 24 hours after injection), and maximum tolerated dose (MTD) or optimal dosing. A key secondary endpoint will be objective response to therapy in distant untreated lesions. We expect to see results of the trial as they become available due to its open-label design throughout 2015 into 2016.”

According to TipRanks.com, which measures analysts’ and bloggers’ success rate based on how their calls perform, analyst Y Katherine Xu has a total average return of -5.9% and a 32% success rate. Xu has a -3.7% average return when recommending DVAX, and is ranked #2934 out of 3343 analysts. 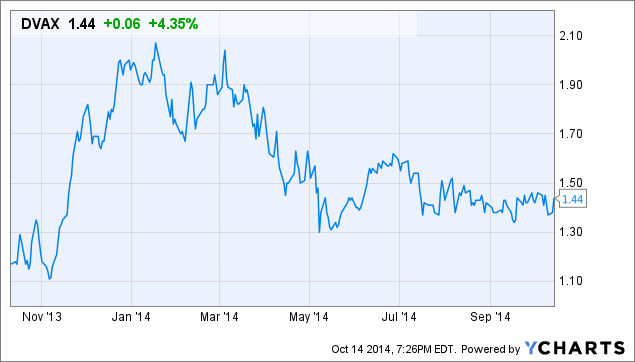