Miller observed, “We believe that Cabela’s benefited more than others during the surge last year, with better supply of ammo, which likely aided traffic, but the lingering softness prompts concerns that competition or expense cutbacks might be additional contributing factors to softer top-line trends. Customer reaction to new Cabela’s branded product has been positive, according to management, although we wonder if the expanded higher-end offering could color consumers’ perception of the broader value equation. The seasonally important fourth quarter is now expected to see a midsingle-digit comp decline, versus our estimate of a low-single-digit decline. We had anticipated that an inflection to positive comps by the end of the year or early 2015 could be a catalyst for shares, but we now believe that investors are likely to retain a cautious approach and look for clear evidence of improved underlying performance. Longer-term positives include the 40% to 60% higher sales and profit performance of the 20 new format stores, versus the legacy stores, and solid double-digit loan growth for the financial services business. “ 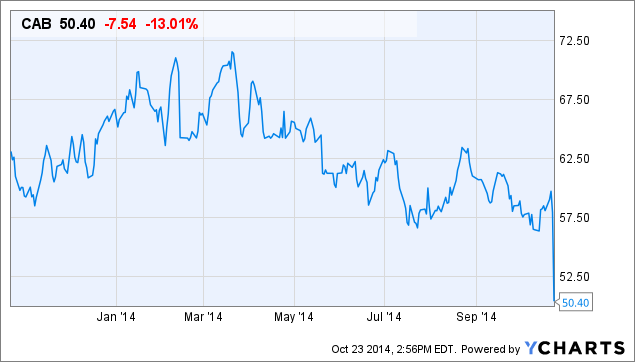