William Blair analyst Anil Doradla weighed in with a favorable report on Apple (NASDAQ:AAPL), as the company reported record fiscal first quarter (December) results. The analyst maintained an Outperform rating on the stock, without suggesting a price target.

Doradla wrote, “We believe Apple will continue to benefit from the strong iPhone 6 product cycle in its March quarter since the company continues to gain share from Android users and first-time smartphone users in emerging regions. In addition, management highlighted that only a fraction of the company’s installed base has upgraded to the new iPhone since it was released last September, giving us confidence that the product cycle still has some legs. On the China front, we believe the company’s strong results reflect a change in consumer preference in the country since many have predicted that Chinese handset vendors, such as Huawei and Lenovo would perform better than Apple, given an iPhone’s average selling price is almost double its nearest competitors. Given the large market opportunity in China, we believe this trend could help drive growth for Apple in the long term. Lastly, Apple continues to return large amounts of capital to investors through dividends and share repurchases, a trend we expect to continue over the next several quarters.”

The analyst concluded, “With a stable gross margin outlook, the ongoing iPhone 6 product cycle, and continued share repurchases ($5 billion this quarter), we believe Apple is well positioned to report upside in the March quarter.” 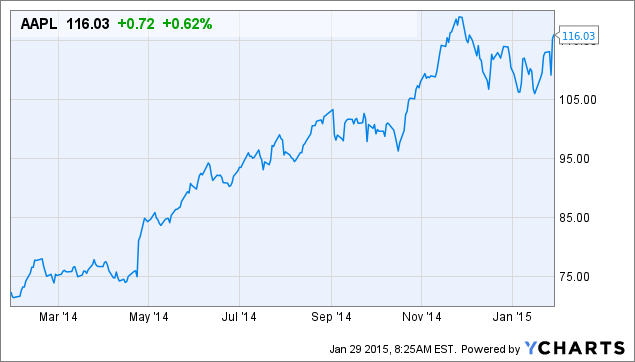