Yesterday, VMware Inc. (NYSE: VMW) held its analyst day in San Fransico. The company made three announcement at the conference. First, the company announced a converged infrastructure—dubbed the EVO family—that represents a pre-integrated hardware and software SDDC platform designed to simplify the implementation of a software-defined environment with a “one-throat-to-choke” support model. The company is partnering with Dell, EMC (EMC), Fujitsu, Inspur, NetOne, and Supermicro and will offer the EVO RAIL model targeting the midmarket, supporting up to 100 virtual machines, and the EVO RACK model designed for cloud scale data center deployments. The second announcement consisted of joint initiatives with Docker, Google (GOOG), and Pivotal to help enterprises run and manage container-based applications on a common platform at scale in private, public, and hybrid clouds. The final announcement was that the company rebranded its hybrid cloud offering (vCHS) as vCloud Air and introduced new capabilities as well as service provider partnerships.

In a reaction to the analyst day, William Blair analyst Jason Ader maintained a Market Perform rating on the VMW’s stock today. No price target was assigned.

Ader wrote, “While we believe that VMware’s dominance in core x86 server virtualization software provides a powerful foundation for addressable market expansion, we worry that workload migration to the public cloud will be a persistent headwind to the base business and that several of the growth engines the company is relying on could take longer than expected to materialize. As a result, we continue to project 15.4% revenue growth in 2015, in line with management’s new curtailed view. We remain cautious on Nicira’s (NSX) growth trajectory given the nascent stage of SDN adoption and a fierce defense from networking giant Cisco (CSCO). While management cited growing demand for NSX, it represents less than 2% of the company’s total bookings and will not contribute meaningful revenue until 2015. Similarly, while VMware’s vCloud Hybrid Service (rebranded vCloud Air) seems well suited for its installed base of large enterprise accounts, we worry that vCloud Air will have a tough time competing over the longer term with entrenched IaaS players like Amazon (AMZN) and Rackspace (RAX). On the positive side, both management and our reseller contacts indicate that the vCloud suite, VSOM, and VSAN are seeing solid growth and are helping drive strategic ‘stickiness’ in VMware’s customer base.”

With regards to VMW’s second announcement Ader wrote, “The collaboration will enable enterprises to leverage their existing VMware infrastructure for running and managing enterprise applications, whether in a container or a virtual machine or a container within a virtual machine. We believe that the announcement validates the significance of the container technology threat to VMware’s core business and represents more of a defensive move aimed at keeping customers in the fold rather than an offensive revenue generating opportunity. We believe that one of the key benefits associated with container-based technology is that it allows organizations to cut VMware out of the equation, thereby reducing costs and complexity while improving performance and agility. We therefore continue to believe that emerging container technologies pose a fundamental long-term threat to stand-alone hypervisor vendors such as VMware and Citrix (CTXS) that do not own their own operating systems. Containers offer compelling advantages over virtual machine-based architectures that include faster provisioning times, enhanced portability, and significantly lower memory and CPU resource overhead requirements. See the container primer section below for more details.”

According to TipRanks.com, which measures analysts’ and bloggers’ success rate based on how their calls perform, analyst Jason Ader has a total average return of 7.1% and a 60.5% success rate. Ader is ranked #885 out of 3261 analysts. 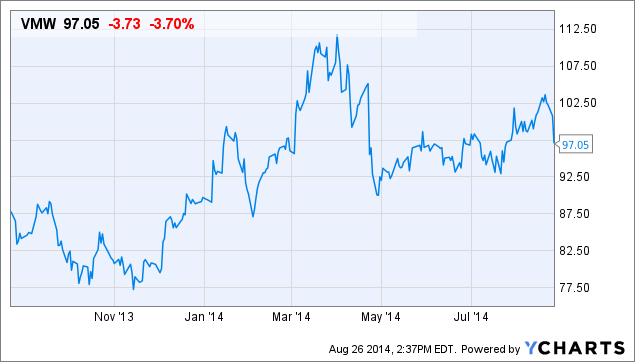