In a research report published today, William Blair analyst Matthew O’Brien maintained a Market Perform rating on C.R. Bard (NYSE:BCR), following the news that Medtronic’s (MDT) IN.PACT drug-coated balloon (DCB) might be hitting the market sooner than expected, this translates into heightened competitive risk for BCR in DCBs. No price target was provided.

O’Brien, wrote, “With C.R. Bard anticipated to commercially release its Lutonix DCB early next year, the altered time frame to approval for Medtronic essentially puts the two companies on the same launch schedule. Consequently, the significance of Bard’s first-mover advantage in the space has been eliminated.” O’Brien added, “There are still a lot of questions surrounding the efficacy and cost differences between the two devices and the ultimate call as to who wins is uncertain at this point. We note that while surgeon commentary related to IN.PACT is pretty bullish, and the data looks compelling (particularly when looking at the 12-month clinically driven target lesion revascularization rate of 2.4%); however, we believe that C.R. Bard has several compelling qualities (similar effectiveness with lower paclitaxel dosage, and a very rigorously designed trial), which should get surgeon attention. Over the longer term, we believe that the market for DCBs should be significant (roughly $1 billion seems reasonable to us, though these products will cannibalize the use of stents in the peripheries, in our opinion) and that both providers will capture a meaningful portion Covidien [COV $90.56; Market Perform] is developing a DCB as well, but with the company being acquired by Medtronic, it should largely be a two-horse race).”

O’Brien added, “While we recognize the considerable long-term opportunities in front of the company (including drug-coated balloons) and our bias on the name remains favorable, most of these growth drivers are quite risky or remain a couple years away from significantly affecting the top line. Consequently, with the stock trading at roughly 16 times our cash 2015 EPS target, we will remain neutral for the time being but continue to recommend investors with a longer time horizon (more than 12 months) add or start positions in this high-quality franchise. We rate the stock Market Perform.”

According to TipRanks.com, which measures analysts’ and bloggers’ success rate based on how their calls perform, analyst Matthew O’Brien has a total average return of -5.1% and a 28.6% success rate. O’Brien is ranked #2845 out of 3298 analysts. 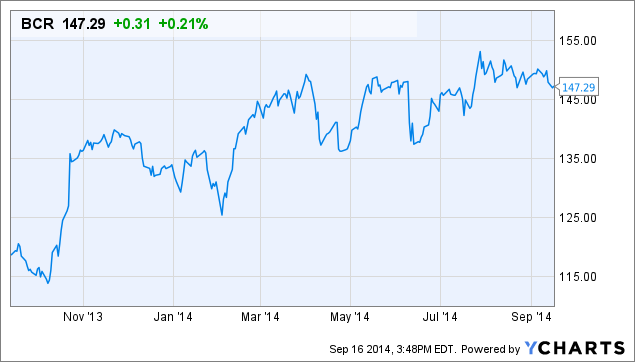