Furby noted, “We maintain our Outperform rating and increased our 2014 non-GAAP EPS estimate to $1.99 from $1.98. Our 2014 revenue estimate is now $506.5 million (23.4% growth), up from $504.9 million (23.0% growth)”. The analysts continued, “New business activity in the quarter—particularly in the enterprise market—was strong, with management calling out notable enterprise deals including a 40,000-seat win in the services vertical, a 21,000-seat payroll-only win with a global food company, and a 10,000- seat payroll-only deal in the automotive sector. Consistent with our preview, the company alluded to a whale in the pipeline—a large, payroll-only prospect that we believe would represent by far Ultimate Software’s largest ever transaction (we estimate around 180,000 seats). Our discussions indicate this deal is in the very late stages, and our sense is that the company should be in a position to announce this win as soon as next quarter’s earnings call—a positive catalyst for shares, in our view”. And concluded with, “we believe this market has the potential to accelerate recurring revenue growth in the next few years”.

According to TipRanks.com, which measures analysts’ and bloggers’ success rate based on how their calls perform analyst Justin Furby has a 6.5% average return and a 66.7% success rate. Furby is ranked #1747 out of 3190 analysts. 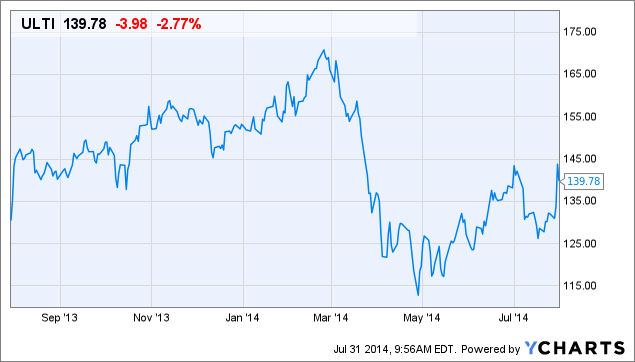 Oppenheimer Assigns Perform On Shares Of The Ultimate Software Group