In a research report issued yesterday, William Blair analyst Tim Lugo maintained an Outperform rating on Salix Pharmaceuticals (SLXP) with a $157 price target, following a positive regulatory response from the FDA regarding SLXP product, subcutaneous (SC) Relistor for the treatment of opioid-induced constipation (OIC) in patients taking opioids for chronic noncancer pain. The FDA response states that SC Relistor can be approved on the data submitted in the sNDA along with extra information to be submitted to the Division of Gastroenterology and Inborn Error Products (DGIEP).

“We view the FDA guidance of a post-approval observational study on MACE as an incremental positive for Salix. Before Monday’s correspondence, there were questions as to whether the FDA would require a MACE study before sNDA approval. The primary concern raised by the FDA for the class, which initially was cited in the SC Relistor complete response letter received on July 2012, is the risk of MACE, which were observed during the development of alvimopan, a product developed by GlaxoSmithKline and Adolor. In addition to the adverse events observed in the alvimopan development program, Salix saw four cardiovascular-related deaths in its long-term safety study; however, further analysis which was presented at Pain Week in 2012 and discussed thoroughly during a recent FDA advisory committee suggested the adverse CV events were not associated with treatment”.

The analyst continued, “We maintain our Outperform rating because we believe the company holds one of the highest organic growth potentials in the specialty pharmaceuticals industry. Salix is well positioned to execute on 2015 launches of Xifaxan in IBS-D (pending results of a potential advisory committee in the second half of 2014, and a positive regulatory review) and SC Relistor for OIC in patients taking opioids for chronic noncancer pain”.

According to TipRanks.com, which measures analysts and bloggers success rate based on how their calls perform, analyst Tim Lugo currently has a one-year average return of -3.7% and a 60% success rate. Lugo has a 1.5% average return when recommending SLXP, and is ranked #2783 out of 3215 analysts. 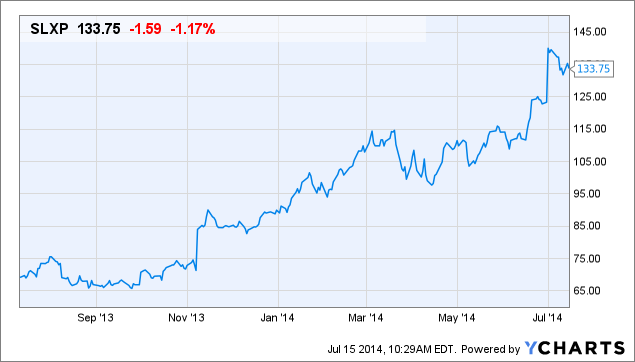