In a research report issued today, William Blair analyst Tim Lugo assigned a Market Perform rating on Endo Health Solutions (NASDAQ:ENDP) with a $71.00 price target, following Tuesday news that Endo delivered a proposal to Auxilium (NASDAQ:AUXL) management for a one-half cash/one-half stock deal to acquire the company for about $2.2 billion.

Lugo wrote, “The Auxilium deal represents latest in Endo’s continuing M&A strategy for growth. Endo committed to deploy about $1 billion of capital in three significant transactions during first half 2014 including DAVA Pharmaceuticals, Boca Pharmaceutical, and Grupo Farmaceutico Somar, and the acquisition of the Sumavel DosePro product. With the Auxilium deal, management has now reached its guidance for acquisitions during 2014 and we would not expect further deals until Endo integrates Auxilium and uses cash flow for deleveraging. While we continue to be impressed by Endo’s management and execution in its M&A strategy, we believe the legislative debates surrounding re-domiciled companies such as Endo could be an overhang on shares. However, shares now trade at a reasonable 13.3 times 2015 pro forma EPS estimate of $5.09. We continue to rate shares Market Perform as we await clarity on the scrutiny of ex-U.S. tax inversions, as a significant increase in Endo’s tax rate may complicate the company’s M&A strategy, especially in an environment of rising interest rates.”

According to TipRanks.com, which measures analysts’ and bloggers’ success rate based on how their calls perform, analyst Tim Lugo has a total average return of -2.0% and a 42.9% success rate. Lugo has an average return when recommending ENDP, and is ranked #2730 out of 3284 analysts. 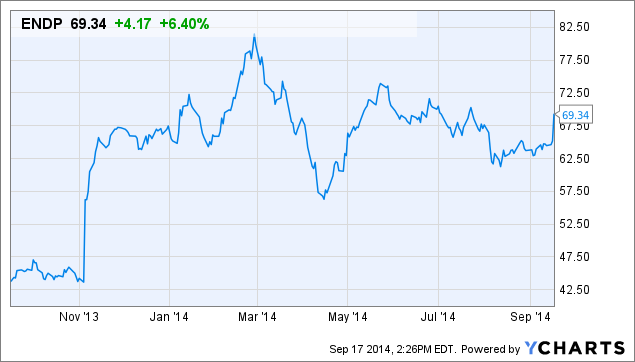